An experimental greenhouse by Isi Sementi at the Ricci company in Cesena, Italy

An experimental greenhouse to test tomato production in the Italian Romagna area was set up by Isi Sementi in Cesena, at the Lucia Ricci farm.

"Among the various types of tomatoes on trial, the varieties that I sell best and that are most requested by my customers are those that combine a particular color with a good flavor. That is why the yellow, orange and melange datterini tomatoes are the most frequently requested. I try to keep the price stable throughout the production season, at around 4-5 Euro/kg, although it can drop a little during peak periods. Multi-variety packs, which offer a mix of colors, are also very sought after," explained Lucia Ricci.

Among the oxheart tomatoes, Lucia Ricci also grows the Rosamunda variety. "This is a tomato that is appreciated by customers both for its color and the consistency of its flesh.

These tomatoes stand out for their shape and color. "They are in great demand at the moment and fetch higher prices than the more traditional ones. We have a large selection in our catalogue (see FreshPlaza of 06/29/2021), which allows us to diversify our production. For companies such as Lucia Ricci's, which represent an important customer segment for us, the preferred channels range from direct selling on the farm to local shops, street markets and small supermarket chains," said Bastoni.

Each company must understand what it wants to do in the long run, i.e., first of all by defining its commercial outlet and then by starting to produce. This is how Ricci works. It has chosen to sell directly and designate only the surplus to an intermediary. This does not mean that the company's approach is not as professional as those who produce larger quantities or sell abroad.

The Lucia in Fattoria company was set up a few years ago, when the owner decided to change her life. After graduating in Environmental Sciences and gaining some work experience, partly acquired at university, she decided to devote herself entirely to farming and now cultivates 6 hectares, mainly with vegetables that are sold directly. There are also orchards, the produce of which is also sold to local traders.

“One of the biggest challenges at the moment is the lack of water. It hasn't rained seriously for months and there is little availability from my well. For bureaucratic reasons, I can't access the secondary distribution system of the Emilia-Romagna Canal, so I have to cut back on irrigation these days," she explained.

The cost of raw materials is also affecting the company's budget.  Mulching sheets, for example, as well as those for the greenhouses, have risen sharply in price. And you can't dump everything on the shoulders of consumers. 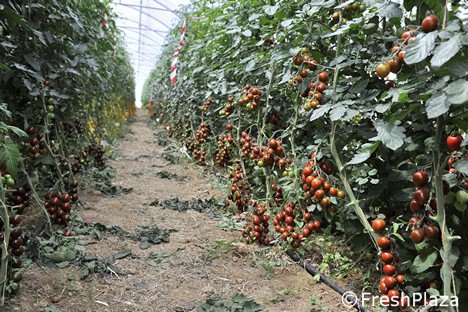 The technical day held on Tuesday 13 July 2021 at ISI Sementi was attended by numerous technicians from cooperative and private companies, as well as farmers from the area. "We received excellent feedback," commented Marco Bastoni and Andrea Casadei.