That’s why they embarked on a trial to find new varieties that grow well in South Florida and that possess valuable traits for future breeding work. Some of these new types included ‘solo’ type papayas that historically have not been widely grown in southern Florida.

“This research is timely as growers are looking for higher-value crops that resonate with consumers,” said Alan Chambers, a tropical plant geneticist at the University of Florida Institute of Food and Agricultural Sciences (UF/IFAS). “Additionally, consumers are looking for novel fruit and fruit with superior quality.”

Identifying cultivars
“This work helped us identify diverse papaya cultivars that grow well in southern Florida. It also identified many types that should be avoided due to poor yield or quality,” Chambers said. 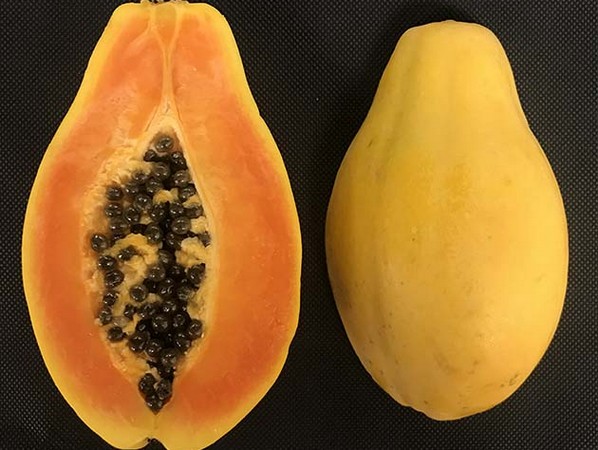 This solo variety known as N08-75 was grown at UF/IFAS Tropical Research and Education Center and found to be low in compounds that may negatively affect fruit flavor for consumers.

“One of our major objectives in the trial identifies the best ‘solo’ type papaya for southern Florida. These papayas are worth more than common papayas, and they have a superior flavor,” he added. “‘Solo’ type papayas are a good option for those looking to diversify their crops. We think that ‘solo’ papayas are an attractive option for more people because they lack the “musky” aroma that is so unfavorable to many people.”

Papaya is popular, versatile, and can yield a crop within the first year after planting — a rare feature among perennial tropical fruits. Unfortunately, expansion of the papaya industry in South Florida is hindered by low prices and a lack of varieties resistant to the papaya ringspot virus (PRSV).

Breeding program
“We are working to address these challenges through our papaya research and breeding program,” said Sarah Brewer, a graduate research assistant on the team. “Through this trial, we have identified papaya varieties with excellent fruit quality characteristics and strong performance in the field. We are now using these varieties in our breeding program, in combination with PRSV-resistant lines. The ultimate goal is to develop virus-resistant, ‘solo’ papayas that grow well here in Miami-Dade County.”

Cultivation of ‘solo’ papayas in South Florida may benefit both growers and consumers, said Brewer. “‘Solo’ papayas are well known for their superior sweetness and flavor. Many of the ‘solo’ papaya varieties in this trial were estimated to have higher sugar content than the large-fruited ‘Maradol’ variety,” she said. 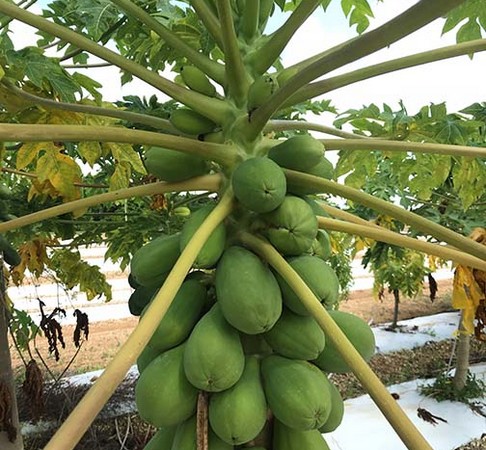 This solo papaya was grown at UF/IFAS Tropical Research and Education Center as part of a trial to find new varieties.

“In addition to delighting consumers with outstanding flavor, ‘solo’ papayas may entice growers with the potential for higher profits,” said Brewer. “In 2020, ‘solo’ papayas retailed for nearly one and half times the price of ‘Maradol’ and other large-fruited varieties.”

Import and production
The United States is a big importer of papaya with 192,070 metric tons in 2019, or about 70 percent of all internationally traded papaya. Papaya is cultivated throughout tropical and subtropical regions of the world including South and Central America, the Caribbean, Southeast Asia, India, Africa, Australia, and the Pacific Islands. As of 2018, annual global production of papaya exceeded 13 million metric tons, making it the fourth most popular tropical fruit after bananas, mango and pineapple.

The opportunity to grow papayas is dependent on the climate and availability of locally adapted varieties. South Florida’s subtropical climate possesses ideal growing conditions for papayas in the continental United States.

Papayas are grown year-round, largely in the Miami-Dade County area, with the largest production occurring during the summer and fall. In recent years, the local growing community has favored growing for the green market. Identification of ‘solo’ papaya varieties that perform well in southern Florida and command a premium price may facilitate the expansion of the dessert fruit market and an increase in profitable papaya acreage.