Recent studies have shown that plant root architecture determines crop resilience and productivity. For example, deep root structures improve drought resistance and maintain high crop yields even without rainfall. Conversely, shallow root structures are advantageous for growth in oxygen-deficient saline paddy fields. To accelerate the adaptation of crops to expected environmental phenomena, such as droughts and floods, a platform that can rapidly provide real-time feedback on plant root architecture is needed.

Visualizing plant roots in the field requires digging, which is both time-consuming and destructive. Thus, studying plant root structures has been challenging due to a lack of convenient and high-resolution underground imaging methods. 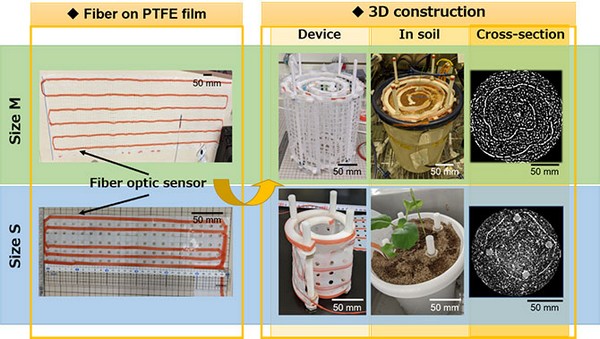 With funding from the Japan Science and Technology Agency’s CREST Program and the Moonshot Research and Development Program, researchers from Japan Agency for Marine–Earth Science and Technology (JAMSTEC) and the National Agriculture and Food Research Organization (NARO) are now prototyping novel imaging devices that can track plant root growth underground via distributed fiber optic sensors.

Agricultural technology is increasingly becoming automated with seamless feedback through Internet-of-Things remote sensors. The novel device highlighted here represents a significant addition to the repertoire of tools that next-generation agriculturalists can use for data-driven automation (Figure 4). A joint patent application was filed by JAMSTEC and NARO with Japan Patent Office for the related inventions.

Read the complete article at www.jamstec.go.jp.