In search of the ‘Holy Grail’ of tomatoes

The development of flavorful, nutritious and firm tomatoes with a long shelf life, good appearance and high yield is the “holy grail” of tomato improvement, said Carlos Avila, AgriLife Research vegetable breeder based at the Texas A&M AgriLife Research and Extension Center in Weslaco and principal investigator for the project.

A proposed project involving the characterization of a new breeding line of tomatoes developed by the Texas A&M AgriLife breeding program at Weslaco could further enhance Texas’ reputation for growing exceptional produce, according to Texas A&M AgriLife Research scientists. 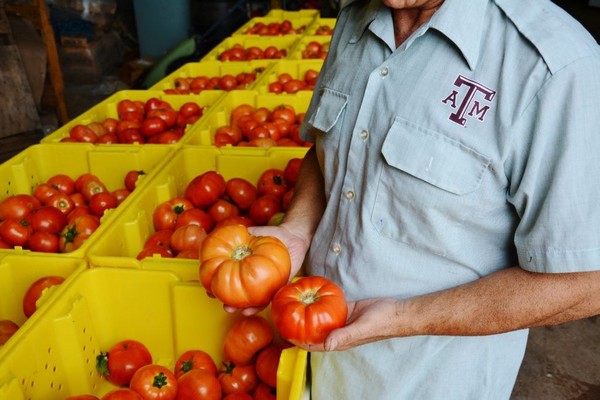 New line developed from lessons learned
Avila said tomato genes such as colorless non-ripening, NOR, and ripening inhibitor, RIN, have been used successfully in modulating fruit firmness and extending the shelf life of commercially available tomatoes, but have fallen short in other areas.

“Unfortunately, besides the beneficial effect on delaying softening, these genes negatively affect fruit color, flavor and nutritional value,” Avila said. “As a result, there is a general concern that most modern tomato cultivars have lost their flavor. This affects both consumption and supermarket sales.”

He also noted most commercial cultivars are susceptible to tomato yellow shoulder, a disorder characterized by discolored regions under the fruit’s skin that reduce its quality and negatively impact consumer acceptance. “The disorder can range from very mild with some internal spotting to quite severe with large areas that are hardened and yellow to white,” Avila said.

Long shelf-life
The team’s goal is to produce a long-shelf-life tomato with all the positive traits and characteristics both the produce industry and consumers desire without negatively impacting taste and color. He said the new year-long project is a continuation of the 2019 project “Novel Tomato Fruit Firmness Trait: Breeding for Long Shelf Life While Conserving Flavor Is Now Possible.”

“For the first year of this project, we evaluated and characterized fruit firmness for trait stability in three locations — Weslaco, Uvalde and Bryan-College Station,” Avila said. “We also developed F1 hybrids, evaluated their shelf life at different storage conditions and developed F2 mapping populations. Our successful accomplishment of these objectives and the very promising data we obtained directed us toward additional lines of investigation in this new project.” 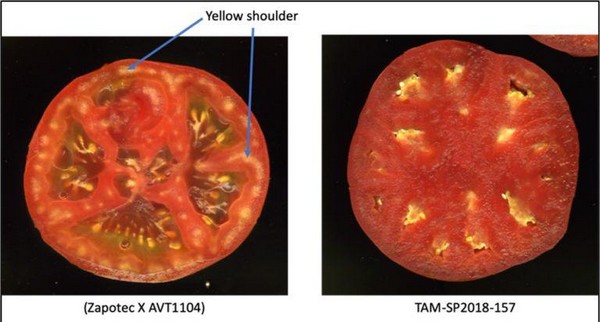 Firmness trait
Avila said the firmness trait in the newly developed TAM-SP18-157 line is different from NOR- and RIN-gene-carrying commercial tomato cultivars in that it produces extraordinarily firm tomatoes while conserving both flavor and color. “It does this because the ripening process is not inhibited,” Avila said. “When used as a parental line, the resulting F1 hybrids have shown improved firmness, enhanced sugar and acid content, and higher amounts of dry matter and fruit yield.”

The new line produces a firm tomato that does not “leak” when sliced or diced and has a uniformly red color – traits highly desired by both the industry and consumers, he said.

“This second-year project will focus on production and multi-location testing, along with trait characterization for marker-assisted breeding and registration of the TAM-SP18-157,” Avila said.

Initial field testing yields promising results
Field trials at Weslaco and Uvalde during the 2019 spring season demonstrated TAM-SP18-157 has an excellent combining ability when used as a parent for hybrid cultivar development.

“When crossed as a male pollen donor with soft tomato lines, the resulting F1 hybrids increased fruit firmness in 30% of the tomatoes, dry matter in 15%, sugar content in 11%, and acidity in 10%, as compared to the soft tomato parents,” Avila said. “Additionally, F1 hybrids showed a 67% increase in the yield, indicating TAM-SP18-157 can be used as a parent to improve both tomato quality and yield.”

Joshi said one of the aspects of his work on the new project will be to analyze and quantify the amount of glutamic and aspartic acids in the new tomato line. “We have already harvested some of the tomatoes grown here at the Uvalde center for testing and will be checking them for these two aroma-active amino acids that are integral to tomato flavor,” he said.

The fruit firmness in the TAM-SP18-157 breeding line is superior to what was expected. The tomatoes’ average compression peak indicates a fruit 70% firmer compared to the average firmness in the Texas A&M tomato breeding population.

“This additional firmness provides for a longer shelf life, even when the tomato is harvested when completely ripe,” Avila said. “This allows the tomatoes to fully develop their flavor and nutritional content while staying fresh for a longer period.”

Initial testing also showed TAM-SP18-157 is highly resistant to tomato yellow shoulder disorder. “Yellow shoulder is not a delayed ripening, but an actual disorder of the affected tissue in which green chlorophyll in these regions fails to develop red pigment,” Avila said. “In this instance, the practice of letting the fruit remain on the vine longer so it can ‘color up’ does not work. Neither does increasing the quantity of potassium fertilizer once there is abundant fruit hanging due to the disorder showing up very shortly after fruit set.”

Crosby said he will continue his first phase research by addressing flavor and heat stress aspects of tomato development as well as disease resistance.

He said the initial research indicated early potassium applications can reduce symptoms of the yellow shoulder disorder, though it is necessary to apply a larger amount than what would normally sustain yield, which would increase production costs. “In this new project, fruit from 400 individual F2 plants will be collected to evaluate firmness and yellow-shoulder-resistance-traits inheritance using probability tests,” Crosby said.

Improved tomatoes should benefit Texas producers
The valuable traits of TAM-SP18-157 can be used to substantially improve fruit firmness and resistance to yellow shoulder while also retaining flavor and improving dry matter, sugar content, acidity, shelf life and yield in fresh and specialty high-value heirloom tomato cultivars. “But to introduce these novel traits for continuous cultivar development, the genetic bases need to be understood and molecular markers linked to the trait need to be developed,” Avila said.

He said trait characterization will be performed on TAM-SP18-157, F1 hybrids and the developed F2 population to determine genetic versus environmental components and develop molecular markers linked to the traits.

Juan Landivar, director of the Texas A&M AgriLife center in Weslaco, said the successful characterization and introduction of these traits into commercial cultivars has the potential to revolutionize fresh tomato consumption in a similar way as the Texas A&M mild jalapeño and sweet 1015 onion traits did for their respective commodities.

“These peppers and onions that were developed previously brought a lot of attention and consumer interest, which translated to improved sales and greater awareness of Texas as an innovator in the development of new lines of produce,” Landivar said. “We expect the new tomato improvements will do much the same.”

More importantly, he said, the development of flavorful and nutritious tomatoes with a long shelf life, good appearance and high yield would lead to healthy lives and livelihoods improved through ensuring an abundant supply of nutritious foods.

Avila said he hopes new project results will lead to a publication of trait characterization and breeding line description for TAM-SP18-157 in a suitable scientific journal for public release, and the seed would ultimately be registered and made available through a material transfer agreement.