Rotating greenhouse crops or making use of greenhouses while crops are growing in the field can give farmers more options and more income. The University of Kentucky Controlled Environment Horticulture Research Unit, the Owen Lab, is in the midst of a two-year study to evaluate cucumber varieties for greenhouse production.

“When you look at all the research that’s been conducted in the U.S., hydroponic cucumbers have gained little attention, though there are some researchers looking at cucumbers for high tunnel production,” said Garrett Owen, UK assistant professor in the Department of Horticulture and unit director. “Greenhouse food crop research has been more focused on tomato production, leafy greens and herbs. Our mission is to generate Kentucky-specific data for growers who are interested in growing cucumbers or want to diversify their crops.”

College of Agriculture, Food and Environment doctoral student Paul Cockson is conducting this research on English and snack or mini cucumbers for his dissertation. He is screening cucumber varieties and cultivars for production in Kentucky’s temperate zone—assessing yield data, growth metrics and grading the fruit according to Canadian/U.S. grade standards. 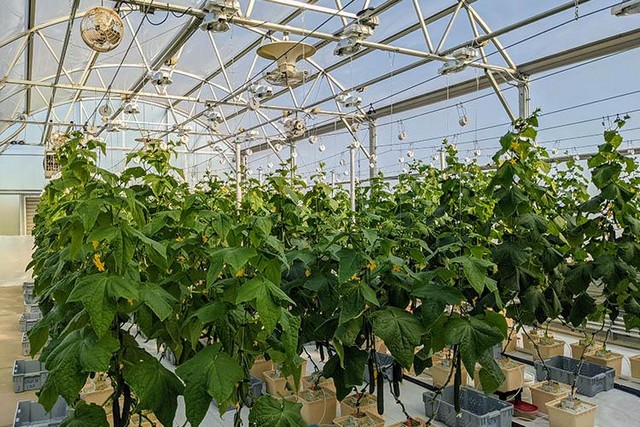 Season extension
Cucumber production cycles are three to four months, so greenhouse growers can get three to four turns per year. The cucumbers in Cockson’s spring study took about 14 weeks from seed sow to final harvest.

“We’re looking at season extension, so we’re going to be doing a spring and a fall crop, looking at truncated production when producers are out in the field (with other crops), to see if they could use some of their existing infrastructure for a quick-turn crop like cucumbers,” he said.

Owen said they chose cucumbers, because many Kentucky greenhouse growers have predominantly grown tomatoes. Cucumbers can adapt to the current systems they already have installed in greenhouses.

Greenhouse vegetable producers must manage the environment and cultural practices to prevent and mitigate any disease or infestations.

“Our No. 1 disease that we’ve experienced so far is powdery mildew, but with good cultural practices and management of the environment, we’ve only had to treat or spray for powdery mildew in a few instances,” Owen said. 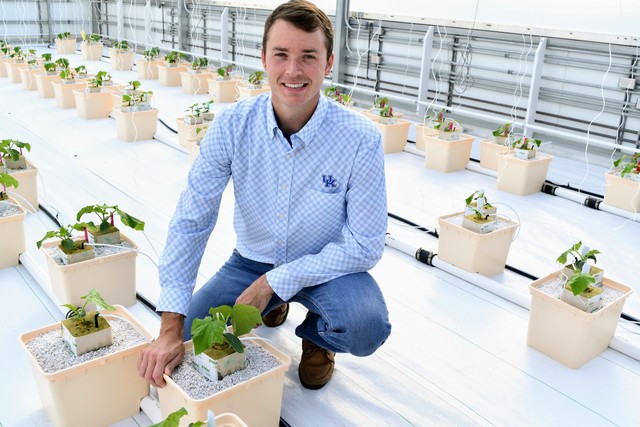 The team have seen some interesting trends for fruit quality among the different types they’re assessing.

“We’re seeing some of the fruits elongate or lengthen or expand differently, and that’s something odd,” Cockson said. “Normally you assume that on the vine, the cucumber is going to lengthen and fill out at a consistent rate to produce a very consistent product. What we’re seeing is that some of these cultivars are producing lesser-grade fruits, and so we’ll be comparing instances of fruit morphological changes.”

They’ve also seen differences in the time it takes a vine to grow.

“Some are growing slower, so that will help inform growers. If a grower is looking for an aggressively growing cultivar, and they want to get in and out quickly, we can recommend one type versus another,” Cockson said.

He said the study cucumbers are performing extremely well, under the conditions in the UK greenhouse.

“In my opinion, this is the perfect fit for Kentuckians, someone with that truncated production or season extension, because these cultivars are performing so well and growing so rapidly and producing so much,” he said.