"Israel can teach the world how to grow in extreme climate"

“Growing food in high temperatures, with little water available, is no more than usual for Israeli growers. For that reason, growers from around the world can use Israeli solutions to adapt to warmer weather,” David Silverman, advisor at the Israeli ministry of agriculture states. “Despite its small size, Israel possesses a dense amount of research institutions in the field of agriculture. With our diverse topography and climate zones, we manage to maintain intense agriculture in the desert.”

According to David, the solution should be threefold: genetics, developing resistant varieties, migration, choose the right area to grow certain crops, and implementing technology. Learning about these Israeli technologies and growing solutions was the goal of the webinar Greenhouse Technologies organized by the Foreign Trade Admission of Israel in the Netherlands. During the webinar, Israeli companies presented their solutions for growing in harsh climates.

Ziv Shaked with DryGair presented DryGair’s solution to reduce air humidity in greenhouses. As pathogens and fungi thrive in humid air, reducing air humidity is of critical importance. Besides, humidity and energy go hand in hand. The DryGair solution extracts water from the air, which condenses inside of the machine. This causes air circulation in the greenhouse that also serves to cool the greenhouse down and create a homogeneous climate. In the Netherlands, DryGair works with Royal Brinkman to provide growers with this solution. The water that is captured in the machine can later be used for irrigation.

Itamar Zisling with MetoMotion addressed the worldwide labor shortage in horticulture. To combat this shortage, their company has developed a system to cut labor costs. The Greenhouse Robotic Worker (GRoW), a self-guided vehicle with two robotic arms, a 3D-vision system, and an onboard boxing system uses cameras to detect crops. The robotic arms capture the crop, place it on a conveyer belt, after which it is boxed and transported to a nearby trolley. Thanks to its camera, GRoW can also harvest at night time. “The financial value of GRoW is enormous, and the payback time is less than 2 years, whilst it saves 80% of the labor, thus allowing farmers to focus on their product rather than labor dependency,” Itamar concludes. 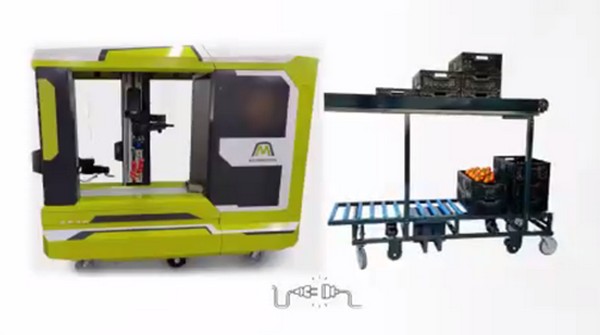 As Tal Maor with Viridix observed, it is hard to know what crops really want. Therefore, their tool analyses root data at a literal root level. “We are giving farmers the right tools to manage irrigation in a simple and sophisticated way,” Tal explains. The solar-powered artificial root can last in the ground for years and can be used both for open field crops and in greenhouses. “All relevant data in one platform, for any crop type and any irrigation system. The outcome is easy to read for any grower. We can connect the system to any kind of irrigation controller, and create an autonomous irrigation solution without changing hardware in the greenhouse. 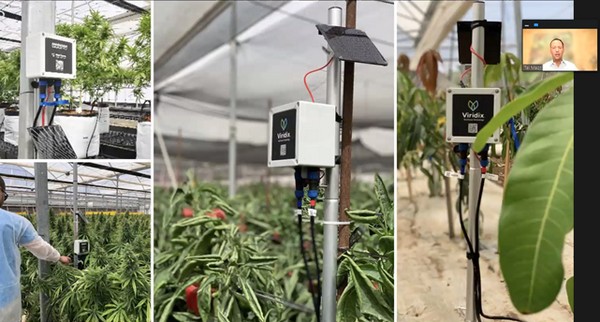 The Viridix tool can be connected to the irrigation controller.

Israel is famous for its drip irrigation systems. However, Erez Gold with Thermo Siv presented an innovative green heating solution that can very well be called the heating equivalent of drip irrigation. Their product is a coated yarn that can be heated for accurate heating close to the crop. The fabric can be used for root heating or for vertical hanging alongside plants. Interestingly, the material is used in both the automotive industry and agriculture, showing that many benefits can be gained from industry cooperation.

Lior Hessels with GrowPonics addressed a completely different problem: although hydroponic growers want to stay away from non-organic fertilizers, using organic fertilizers was not enough for their crops. What they did, therefore, is imitating the process in which chemical fertilizers are being produced but then in a natural way. The trick to this is using bacteria to take Nitrogen from the air and turning that into ammonia, as plants cannot absorb nitrogen from the air.

Hagai Palevsky with Agam Greenhouse Energy Systems stressed the dangers of excess humidity in greenhouses, which causes fungal spread, mildew, and other pathogens. The Ventilated Latent Heat Converter captures air with a salt solution and then filters it. This way, the greenhouse can be closed, saving energy. It also regulates temperature when needed. It can both replace and supplement the existing air conditioning system in the greenhouse. 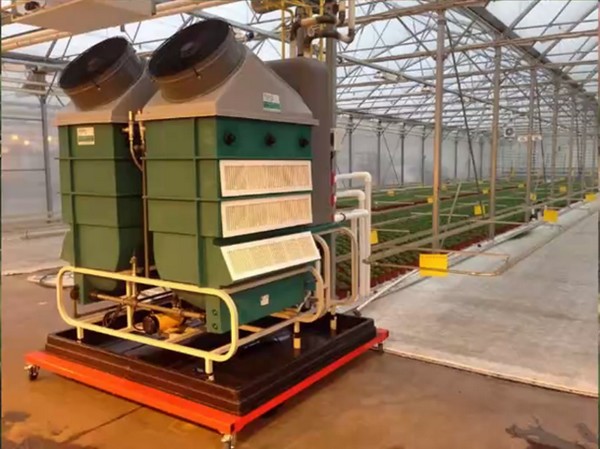 Finally, Eytan Heller with Arugga AI Farming mentioned labor shortage as a big problem in horticulture.  For that reason, Arugga has developed an autonomous ground robot to treat and monitor every plant in the greenhouse. Their first focus is on tomatoes, specifically pollination. With AI-based vision, the robot imitates buzz pollination. Extensions of the robot will include non-contact pruning, pest and disease detection, and yield prediction. As their business model is based on leasing, the robot will be better affordable to growers.