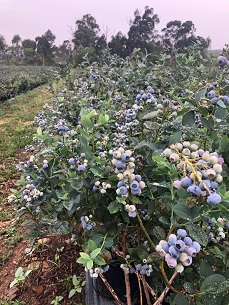 “Along with other producers we’re creating a valley full of blueberries,” says Luan Swart, managing director of Blue Drop Berries in Lydenburg on the Mpumalanga escarpment, where they established an independent blueberry farm in 2017.

They are in the market from September until December; at the moment the plants are accumulating chill units.

Right: blueberries with eucalyptus, extremely valuable as bee forage, behind

Neatly, his sons run an apiary which means bees are on-hand for flowering which will start next month.

“We use very little chemicals, because we took a different approach from the start, a more biological approach. Chemicals work on the short term but there are long-term consequences. We worked with a plant physiologist from the start to ascertain how we could reduce our chemical use through strengthening the plant and through introducing predator insects like ladybugs. Once or twice a year it is necessary to spray but then we do it very early in the morning, before bees are active.” 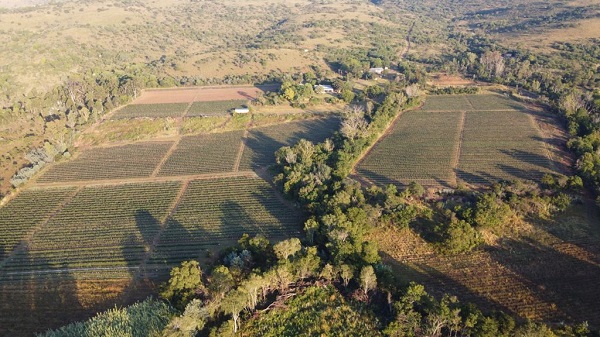 Blackberry expansion
Last year they established 5ha of blackberries as an alternative, after their Middle Eastern client requested blackberries as well as blueberries. Their first crop will be harvested this year from mid-November to mid-December.

“The blueberry market grows every year and along with it demand for blackberries has increased tremendously. Consumers like having a basket of berries as they get to know berries and eat more berries every year. Suddenly the demand for blackberries is much higher. Strawberries we obtain from other growers to complete our offering to the Middle East.”

Increasingly they are not packaging the berries on-farm, but sending the fruit in bulk 2kg and 4kg cartons to clients in Europe.

He notes information wasn’t very readily available at the start which obliged them to first spend a year on conducting trials into different planting methods with the benefit that they have been able to learn for themselves what works best in their area.

Going it alone meant that they planted well established varieties such as Legacy and Star and avoided the potential pitfall of planting new and untested varieties. In a young and dynamic industry, such as blueberries, where producers are trying to get ahead and win ground with new varieties, he remarks that growers are sometimes given little time to first trial new blueberry varieties before large-scale adoption.
Luan made a study of all of South Africa’s export-oriented industries, drawing up financial models of them all, through which it became clear that blueberries could offer up the most rewards. The level of control that is allowed by hydroponics appealed to him.

“Elsewhere in the world blueberry plantings are done in open land but in South Africa that just doesn’t work. For that reason all of our new plantings are in hydroponic systems in substrate. It’s more about the drainage of the soil than about the pH. In South Africa many areas where the climate is suitable for blueberry production, the drainage ability of the soil isn’t sufficient because of a high clay content.”

Transformation through JVs with existing producers 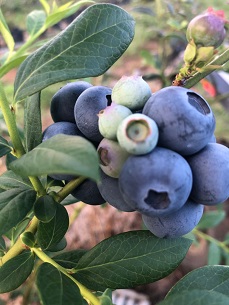 “Many people contact us to enquire how they can enter the industry but to set up a blueberry production unit is R20 million+, so we started looking at a model through which investors can enter into the industry. The plants remain the investor’s assets, who can trade in these assets. In the past doctors would buy weekend farms but today they realise the industry is too competitive to farm profitably on a part-time basis.”

He continues: “Our focus is dual: we’re self-financed, pulling in other innovators, while in the same breath effecting transformation. The establishment of new blueberry farms place a premium on experienced farm managers. Joint ventures are easier in the form of expansion by existing large producers who already understand the industry. For us that creates an opportunity since we are not limited by royalties and closed varieties.”

Unfortunately, he says, the tax incentive to invest in Section 12 J companies, to stimulate the local economy, is coming to an end at the end of this month. The model they are envisioning would fit well into such a stimulus package, lowering the barrier to entry into an export-oriented business on the one hand, earning foreign capital and providing high levels of rural employment on the other.

“If the Rand goes from R14 to the Dollar to R20 to the Dollar, there is only a certain part of your annual production costs tied to that change, while your entire income is linked to that change. That’s the big impetus behind our model. The strength of the Rand is helping our current expansion, the growth medium, irrigation systems, the plant material.”

They lost a few containers of blueberries towards the end of the South African marketing window last year due to nervousness created by the legal tussles between other exporting groups and their growers, which impacted on them as independents. Last year the local market buckled under the blueberry volumes that couldn’t be exported and it also showed up some shortcomings in the local cold chain for blueberries, he says.

“There’s a lot of positivity in the blueberry industry,” he emphasises; it still offers a hedged return on a limited area of land that few other crops can offer.