Awareness-raising action to make the situation of the Spanish agro-food sector more visible.

Coexphal warns about the consequences of marketing products of Moroccan origin

The Board of Directors of Coexphal has presented the awareness-raising initiative "Origen Marruecos" ("Origin Morocco"), which aims to address the situation suffered by the Spanish agro-food sector due to trade agreements with Morocco. It has been sparked by the current diplomatic and humanitarian crisis and aims to make supermarket chains question the ethics of buying products of Moroccan origin in the current situation. It also aims to raise the awareness of the end consumer, showing them how to identify Moroccan products in the supermarket by looking for the number 611 in the bar code.

"Origen Marruecos" includes a series of initiatives to bring the entire Spanish agro-food sector together and get it to participate. The first of these has been to send an open letter to the supermarket chains currently selling products of Moroccan origin, to draw their attention to the contradiction of continuing to sell Moroccan products, which do not meet the same food safety and environmental impact requirements as Spanish and European products. It also aims to call attention to the Administrations that remain impassive in the face of the continuous breaches of the Free Trade Agreement between the European Union and Morocco.

"We are here to defend our companies and producers, because we believe that, given the seriousness of the situation, no half-truths or weak initiatives are worth it. "Origen Marruecos" aims to draw attention to what we are supporting when we are putting Moroccan products on the shelves, or when we buy these products, especially when there are also Spanish products available," said the manager of Coexphal, Luis Miguel Fernandez. 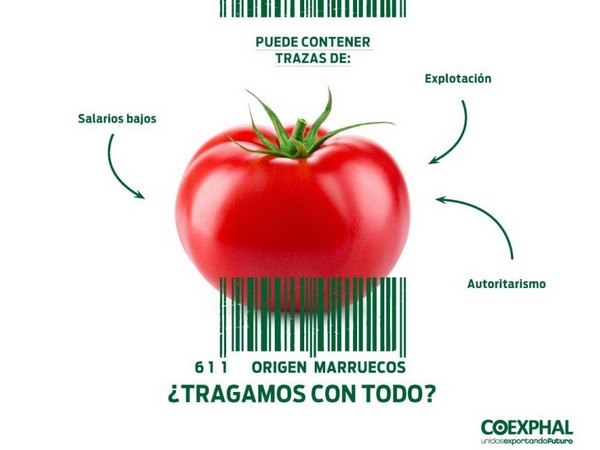 Social media
Since last Friday, social media has been flooded with posts about how the main Spanish fruits and vegetables are being affected by the massive import of Moroccan products. Under the hashtag #TragamosOrigenMarruecos, the general public is invited to join in the defense of European products.

Imports from Morocco are growing every year and always exceed the established quotas. Since production costs in Morocco are so low, they continue to have a competitive advantage over Spanish products despite import duties. Morocco already markets more tomatoes in the EU than Almería. In Spain, fruit and vegetable imports from Morocco have grown by 40% in 5 years. With €304 million in the first quarter of this year, the North African country is Spain's main supplier of foreign fruits and vegetables. Spanish tomatoes are the most affected by the situation, but imports also have a huge impact on Spanish zucchini, watermelon, soft fruit and stone fruit, among other products.