"There's no such thing as a home office in vegetable farming"

In Kirchweidach, a small village some 100 kilometers east of Munich and just a stone's throw from the Austrian border, lie the farms of brothers Wolfgang and Florian Steiner. They grow conventional and organic fruit vegetables, in cooperation with REWE Group. The year 2020 went very well for the brothers, despite all the upheaval. That, they say, is partly thanks to the strict rules that were in place from the start, and their consistent implementation: "There's no such thing as a home office in vegetable farming."

Despite isolated waves of hoarding, the annual planning was easy to implement: "At the beginning of the crisis, we barely kept up, but since then everything has returned to normal. We do not feel the changes in the market as much, thanks to our direct cooperation with REWE, and they haven't had a structural impact on our operations." Both Wolfgang's conventional and Florian's organic farms have seen a steady increase in demand. 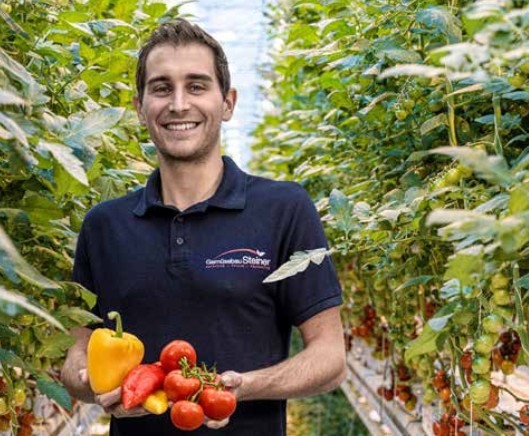 Finetuning in the new greenhouse in Emmerting
Last year, Wolfgang Steiner put his new greenhouse in Emmerting into operation, where tomatoes can be harvested even in winter, due to modern LED lighting. So far, he says, he is very pleased with his investment in the greenhouse: "We are still learning to operate the new LED and dehumidification system. We're working on fine-tuning the greenhouse to optimize our yields even more. But the flavor is already right - that's still most important for us."

Steiner had already been working with lighting on 2.2 hectares at the old site in Kirchweidach, which allowed him to determine that there was still a demand in the market. "However, we had still been working with older lamps in Kirchweidach, so we opted for more efficient LEDs for Emmerting." These fit well into the well-rounded energy and sustainability concept of his business and his customer REWE, according to the entrepreneur: "In Emmerting, we get the energy from a neighboring power plant. Add to that the LEDs, which save 35% energy compared to conventional lamps." 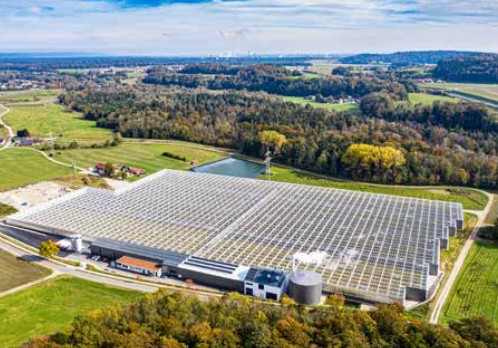 Both the Kirchweidach as the Emmerting greenhouse were built by Gakon, the company that is currently realising the new Steiner greenhouse in Geinberg.

The question of whether it is at all necessary and justifiable to grow tomatoes in winter was of course asked as well, but "…we want to see the 'big picture' and include all factors. The selection of local vegetables in winter is small, in the cold season the demand for tomatoes is high as well and if they are not available regionally, they will simply be imported. Then, for example, transport emissions or water issues in the country of origin will come into play. We can now close this gap in the market with regional produce."

To match the new greenhouse, a new high-bay warehouse was built and a new quality control system was introduced: "We have further standardized our processes, so on the one hand we can give our growers quick positive feedback on their work, and on the other hand we can quickly intervene and adjust our processes if something doesn't quite fit. In our new high-bay warehouse, the focus is on automation and digitalization. We can directly access data from the greenhouse and climate data to optimize control in the warehouse," says Wolfgang Steiner. 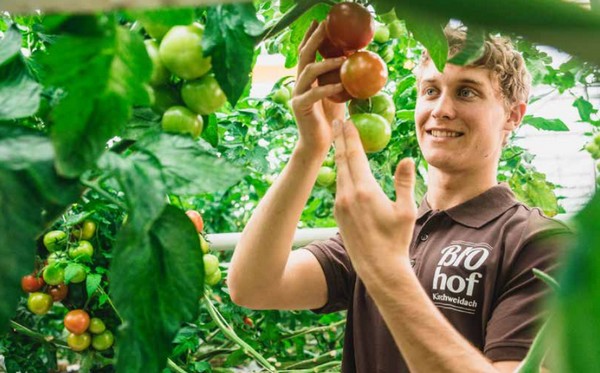 Florian Steiner had officially opened his greenhouse in 2019 and is taking things a bit more leisurely. "We have a wide range of organically cultivated products: five varieties of tomatoes, peppers and cucumbers. There is still more than enough to do, even without new buildings and new technology," he laughs.

"Completely plastic-free since last year"
The packaging discussion took a bit of a back seat last year due to the pandemic, but it was still on the table for Wolfgang and Florian Steiner. At the BIOhof, the vegetables have been packaged completely plastic-free since last year. "We have completely switched to cardboard packaging for our products, both at REWE Markt Ltd and at other chains that belong to the REWE Group," says Florian Steiner.

"For our conventional products, we have developed a snack cup ourselves together with a packaging manufacturer. This will be launched on the market in the summer, when it will be tested. If the packaging is well received by the customer, many more of our products in plastic-free packaging will follow. Plastic-free tray packaging is still a big issue in the fruit vegetable sector," says Wolfgang Steiner.

Planning security thanks to contract farming
When the Steiner family started their cooperation with REWE Group a few years ago, they naturally had to weigh up whether they wanted to become dependent on a single buyer. Now, the brothers fully agree: they do not regret the partnership at all.

"As growers, we benefit from the regulated seasonal planning, in which we can coordinate in advance exactly in which period which quantities are needed. If there is a need for more produce - after all, vegetables are still a natural product and depend on external circumstances - REWE can regulate the volume pressure with advertisements. We are not left alone in such situations, and not every producer can make that claim."

At the same time, he said, they motivate and inspire each other to start new projects. "Of course, we have to meet certain requirements of the food retail trade, but in return we also get support in implementing new, innovative ideas - such as our new plastic-free packaging. The developments can be implemented together quickly, close to the market and in line with consumer needs."

For the Steiners, contract farming also comes up trumps in terms of sustainability: "The quantities we produce are efficiently controlled. This means that there are fewer losses along the chain. Also, storage time can be reduced, which ultimately means that the product lasts longer in the store and with the consumer. This means food waste can be avoided at the retailer and at the consumer’s home."

Wolfgang and Florian conclude by saying: "The planning security we achieve thanks to the contract farming for REWE Group allows us to implement innovative projects, produce more sustainably and make our operations fit for the future."