Searching for the (real) cause of a ToBRFV infection

The Tomato Brown Rugose Fruit Virus (ToBRFV) originated in 2014 in the Middle East but is now a threat to all growers, wherever they are. The virus makes no distinction between conventional and organic growers. Once infected, both growers have to completely disinfect their greenhouse, keep it clean and do everything they can in order to prevent the virus from returning. However, not everyone succeeds in this, given the recurring infections at various growers.

The outbreak of ToBRFV prompted organic crop consultants Aldo van Os and Mark Velders of The Conscious Farmer (TCF) to develop a practical preventive protocol but also to seek an answer to the question of why the virus is able to spread so rapidly and on such a large scale.

Seeking experience
Together, they looked for practical experiences as soon as the virus emerged. "You need practical experience to distinguish the right thing from the stream of information that arose after the first outbreaks. Moreover, the prevention protocols that soon emerged were often too theoretical and difficult to apply for growers," say Aldo and Mark.

After searching for some time, the TCF advisers finally found an 'expert by experience'. A German crop consultant had experience with seven German conventional growers who were infected with the virus in 2018. Together with her, TCF developed a prevention protocol that is easily applicable for organic growers.

The very practical document has only 15 pages. "Complete with a simple list of cleaning agents and disinfectants that are permitted in organic farming," says Mark. "And including instructions on how and where to use them." 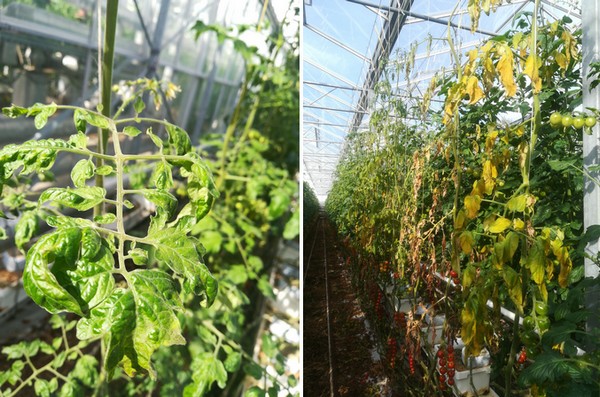 Photos of ToBRFV infection in the conventional culture. Left: bubbled and discolored leaves. Right: Discoloration and death of leaves due to ToBRFV in a crop of the Juanita variety.
Photographs courtesy of: Scholz-Döbelin, Regional Plant Protection Service of Germany

Identifying the cause
The TCF consultants also came into contact with a non-European grower who grows organically on cocosubstrate slabs. This grower had suffered a ToBRFV infection in two of his greenhouses. Although the infestation was small, it soon proved to be no less persistent.

The TCF protocol was used at both of the grower's locations. At one location, the virus never returned, but it did at the other. And, even worse, the virus came back stronger than before.

This prompted the TCF consultants to ask how this could happen. "When we came into contact with the grower in question, he was already at an advanced stage of cleaning and disinfecting the greenhouse," says Mark. "Without knowing it himself, it turned out that he had not correctly implemented a few important details. For example, the mechanical cleaning of the greenhouse, the first essential step in the protocol, had not been done thoroughly." Besides, the disinfectants and cleaning agents had been mixed when used instead of being applied separately. "As a result, one agent neutralized the effect of the other."

The same grower also grows tomatoes outdoors in a small greenhouse. Whereas conventional growers can remove the substrate mats from the greenhouse, the situation is different with the soil of an organic grower. "We are still working with this grower to get the virus out of the soil. In Israel, successful results have been achieved with steaming and activating soil life. We are going to work on that now. We are also still looking for an effective biological treatment method for the seed. Chemicals are not allowed in organic cultivation and heat treatment does not work with this virus", Mark emphasizes. "There seem to bee initial positive test results with a biologically responsible disinfection of the seeds", Aldo adds.

Photos of a ToBRFV infection of the Romanella variety. Here also photos from conventional cultivation. There are no photos of the organic case in this story. Taking photographs was not permitted.
Photos with permission: Scholz-Döbelin, regional plant protection service Germany

The real cause
The question remains what the real cause of such a virus outbreak is. This last question intrigues TCF's advisers the most. "Only when we understand what the virus is telling us will we come closer to a real solution," says Mark.

In addition to disinfection and prevention, Mark and Aldo observe that the market is currently focusing strongly on resistance. A good development, but one that also raises questions. Mark: "Rudolf Steiner stated a hundred years ago that viruses - in humans, animals and plants - only get a chance when the integrity of the identity is weakened." Don't viruses today get more of a chance because breeding has gone too far?, he wonders aloud. "You may also be able to depart too far from the 'bloodline' of a plant in breeding," Aldo adds. "We do know that much of the resistance to new viruses is found in the older wild varieties." Mark and Aldo, themselves not breeders, do not know the definitive answer, but it does keep them busy.

What also matters, the advisors explain, is that over the years cultivation, including organic cultivation, has intensified and trade has globalized. Aldo: "Fifty years ago, the greenhouses of growers were still small, there were fewer viruses, new viruses did not emerge as quickly and, because of localized trade, viruses spread less quickly. Of course, that also plays a role.

The necessary studies have already been done on the virus itself. And there are still plenty of studies being done at the moment. "It has long been known that Tobamoviruses (of which ToBRFV is one) can survive on dry plant material for decades," Mark points out. "But recently, an Israeli researcher discovered that in healthy, sufficiently moist soil the virus does not survive for more than a month. That is of course very interesting, especially for the organic growers among us," concludes Mark.

Until there is a definitive answer to the question of where the virus comes from, Mark and Aldo see that there is no other option than to keep the greenhouses clean, the soil or substrate healthy, to choose the strongest plants, and to divide the greenhouses into compartments to minimize the financial risk of a virus infection.