Anyone who does a search on Google on the topic of catching insects with UV light will quickly find the well-known blue insect killers as found in snack bars or butchers. This is also the case with Dutch Ardisia grower Dick van den Bos. About four years ago he suddenly suffered the presence of the carnation moth. A pest insect that proved difficult to control.

Dick decided to invest in a UV light trap from LedsProtect, specially designed for horticulture. Since then, he (almost) only encounters the dreaded moth in a trap full of other pest insects and not in his crop. 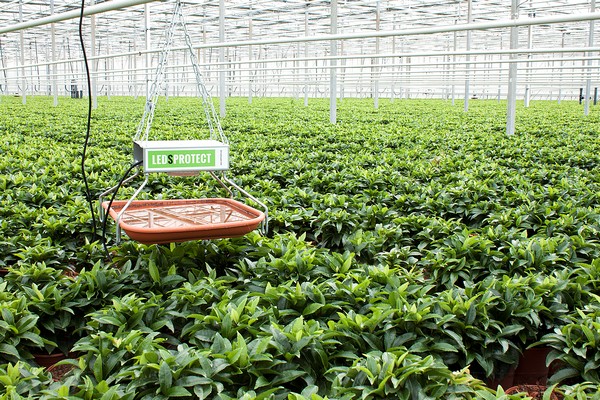 Convinced quickly
“As soon as I started to encounter the moths, I really studied them,” says Dick. Over the years he has grown more and more organically and therefore used less and less crop protection products. "There turned out to be no suitable means to combat the carnation moth, but I still had to do something, especially against the caterpillars of the moth."

A good reason to do a Google search for a solution. He found the solution in the UV light from LedsProtect. After his search, Dick contacted Peter Kerkhof. He developed the UV light and visited Dick in the greenhouse to hang one lamp as a test. “It soon became apparent that I caught a lot of moths. I was quickly convinced.”

Automatic lights
This means that nowadays there are a total of 12 UV light traps spread over the two sections in his 1.3 hectare greenhouse, just above the crop. “Peter has made a calculation based on the optimal range of the trap. All I really had to do myself was make the electricity supplies at the points where the trap was hanging. After that it is a matter of water in the trap and lights on.”

The trap is equipped with UV lamps. They are not on all day. “When it starts to get dark, the lights go on automatically. A sensor in the trap takes care of that. Especially at night, the blue light that reflects in the water really catches the eye and the pest insects fall into the trap.”

But visitors to his greenhouse also always ask about the striking trap. “Many people don't know what it is yet. I always like to explain to them what the trap does for me and I think that many more growers can benefit from it.” 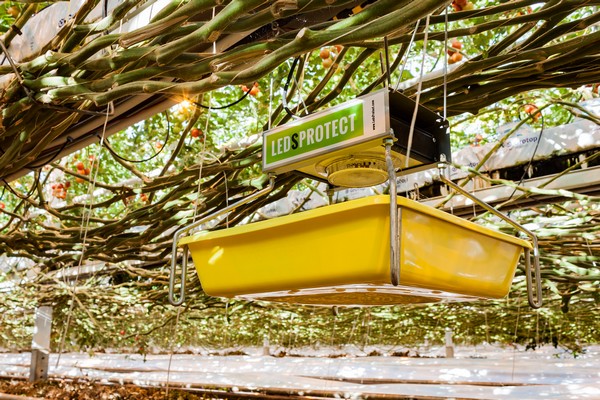 A new version of the UV trap. The latest version, which will be discussed shortly in this publication, is fluorescent yellow and equipped with a renewed lens.

Little bit of soap
It soon became apparent that the trap caught more than just carnation moths. “You are sometimes really amazed at what you find in the trap. Sometimes there are large specimens.” To catch the smallest specimens, Dick always adds a little soap or detergent when replacing the water in the trap. "A tip from Peter to break the water tension, so that some creatures that would otherwise remain on the water are also caught."

It takes about nine months to grow Ardisia. When filling the greenhouse with young plant material, Dick immediately installs the lamps. After that, he regularly checks the lamps to replace water, clean the trap and scout. “Over the years I have been catching fewer bugs. A good sign."

Also important: Dick does not encounter biological control agents in the trap. "I see gliding flies myself, but they are never trapped," just like pest insects from outside the greenhouse. “Because you hang the trap just above the crop and the range of the trap isn't that great, you don't attract additional pest insects. It means that with this solution I can grow even better organically. "