Eating cake regularly in honour of colleagues celebrating their anniversary, is positive. Positive for the company, positive for the colleagues in question and of course also for the rest of the staff, because they benefit from the experience present and from a nice piece of cake.

They are lucky at Peter Dekker Installations. Last Friday, the 30th PDI anniversary of Martien Verhulst and Piet Rensen was considered. Both men have been employed for thirty years and are still enjoying themselves. 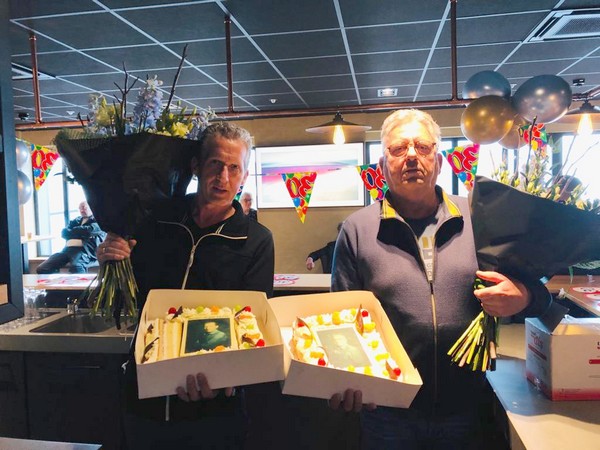 Martien and Piet were given flowers on Friday, commended by the management and of course cake was eaten.

Mix of fresh talent and experience
"It is nice to see that so many people have been with us for a long time," says Martien, one of those celebrating an anniversary and who has been a calculator throughout his PDI time. He himself started as the only calculator, but with the growth of the company he now has two colleagues to calculate with. "Younger guys. They learn from me as a 'man of the old school', while I learn from them. It is a good development that we have such a nice mix of fresh talent and experience."

Sons of growers
Both Martien and Piet have been through a lot in horticulture. Piet first 'in the field' but now as organizer of the service and planning department at the office in Naaldwijk. In honor of his 65th birthday, he already told many great tales last year.

Both men have seen horticulture grow. And sometimes also the grower, the customer. Martien: "What I like is that nowadays you sometimes make the calculations and quotations for the sons of customers from the past. They have now taken over the company, but know where to find us again. I am proud of that."

Martien regularly mentions the 'very complex, challenging projects' for breeding companies that are special. "These are projects with many different departments and then multiple installations in each department, you know. It's nice to work with them and to bring both the calculations and the explanations in text to the customer well again and again, together with the sales colleagues. "

Not ready yet
Both Martien and Piet want to continue for a while. Piet, who is older than Martien, already said last year that he hopes to be able to walk around for as long as possible and continue to do so without getting in the way. And that he hope to keep the annual visit to the greenhouses in Middenmeer to catch up with customers.

And Martien? He is aiming for a new anniversary. "Forty years of service must also be feasible. That's what I'm going for. After all, I still enjoy going to work every day."