Strolling through the greenhouses on the campus of Michigan State University as part of her daily routine, Chrislyn Particka is always thinking. Always planning. Always considering new and creative ways to utilize the space — and budget resources — more efficiently.

As director of the Plant Science Research Greenhouse Facility, it’s her job to ensure the operation runs smoothly for the more than 60 researchers who rely on it. She’s part plant scientist, project coordinator and budget adviser. 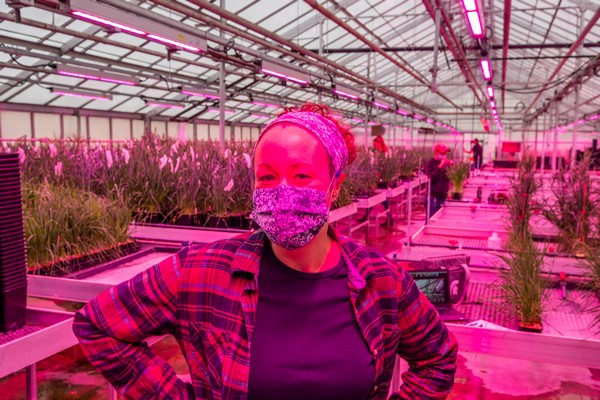 One of her primary objectives is to identify infrastructural improvements that can make the greenhouses more suitable for controlled experiments. Given that most buildings have gone without significant upgrades in several decades, there is a multitude of possibilities. She has teamed with MSU Infrastructure Planning and Facilities (IPF) and other units to begin forecasting what that future could and should look like.

“We’re extremely fortunate to have roughly 90,000 square feet of greenhouse space on our campus,” Particka said. “The facilities allow us to have a representation of all of Michigan’s classes of crops — from row crops and specialty crops to floricultural crops — and to conduct research that is of tremendous value to the Michigan agricultural economy.

“That being said, we’ve started to make some enhancements in partnership with IPF, including installing LED lighting and replacing steam heating in a few of the greenhouses. Not only does this improve the research, it cuts down on energy use and is, therefore, a cost-saving measure for the university.” While the initial investments have been a boon to the greenhouses and the research therein, Particka said there is work to be done.

A helping hand
Particka began her role as greenhouse director in September 2019, previously serving as a research coordinator for the Great Lakes Bioenergy Research Center at MSU. Before that, she was an extension support specialist on a Specialty Crop Research Initiative grant at Cornell University, and also spent five years at a private company in the small fruit industry.

Although she had no prior experience leading a team responsible for greenhouse management, her educational background is in horticulture and plant breeding. Particka earned bachelor’s and master’s degrees in horticulture from the University of Arkansas before completing her doctorate in agricultural and horticultural plant breeding at MSU. She studied under world-renowned berry breeder Jim Hancock, who developed some of the most widely grown blueberry lines in the world.

Despite her impressive resume, nothing could have prepared her for a global pandemic only a few months after she took the director job. “I’ve learned a lot in a short period out of sheer necessity,” Particka said. “I have experience in horticulture, and that allows me to understand what faculty need when they do research. But navigating around workplace restrictions and the pandemic was a whole new thing for everyone. It’s been challenging, but it’s forced my team to get creative and become better problem solvers.”

Communication has been one of her most important focus areas, making sure she is in regular contact with faculty, students and staff. Other initiatives she’s undertaken are a recycling program for disposable materials, implementation of an online work request system, and nurturing relationships around the university with units such as IPF.

Research
Using existing money from the university and potential support from other funding sources, Particka is looking to prioritize needed upgrades. Replacing the glazed-glass outer shell of the greenhouses is a long-term project, as well as updating the existing flooring to ensure proper drainage. Additionally, climate control systems that create precise experimental conditions are something she’s discussed with many researchers.

“First and foremost, I’m trying to help make researchers’ jobs easier,” she said. “The better the facilities are, the better their research will be.”

Delivering solutions to Michigan wheat growers
When Eric Olson describes the driving force behind his wheat breeding program at MSU, it starts with the greenhouses. It’s where all of the early variety development steps are completed for one of Michigan’s most widely produced crops.

“We’ve built our program on the strength of the greenhouse facility,” said Olson, an assistant professor in the Department of Plant, Soil and Microbial Sciences. “Using some new techniques, we’ve turned what used to be four years of field research into an 18-month period in the greenhouse. It speeds up variety development and allows us to get new cultivars into the hands of growers more quickly.”

According to the Michigan Wheat Program, which promotes research and outreach for wheat growers around the state, the economic impact of the crop is roughly $180 million annually. Nearly 36 million bushels are produced each year on 500,000 acres in 75 counties.

Olson was raised on a farm in Wisconsin and is passionate about assisting farmers and rural communities. To do that, he specializes in developing soft winter wheat varieties, seeking greater yield, disease resistance, stress tolerance and end-use quality.

The goal is to partner with the Michigan Wheat Program, the Michigan Crop Improvement Association, growers, milling companies, and plant scientists to create profitable wheat lines for farmers that bolster food security for everyone.

“I have a deep appreciation for how connected the wheat value chain is in Michigan,” Olson said. “We have wonderful relationships all throughout the production process, from the organizations that make the work possible to growers and the milling companies that use the product. Wheat is one of the most important staple crops in the world, and it’s rewarding to be a part of ensuring its viability moving forward.”

Olson said the LED lighting updates have lowered temperatures in the greenhouse, allowing for more stable temperatures and a longer growing season. He explained that plants detect changes in day length, which tells them when to flower, for example. Keeping conditions favorable to the plants for a longer period means the greenhouses can be used for more months of the year and the research is strengthened.

To advance the facilities even further, Olson is one of several researchers who have discussed climate control systems with Particka to stabilize the greenhouse environments for more controlled research over longer periods of time. He credits her efforts in identifying areas of need.

“Not only do we have great facilities, but Chrislyn has done a great job managing them,” Olson said. “She is accessible, helpful, and always open to new ideas.”