In innovation center ‘de Kas’, a new trial with two varieties of sweet pointed peppers grown in the soil has started. During this trial, cultivation is done in the usual way with compost and organic nutrients that are made available by the soil life, supplemented with organic Ca(NO3)2 when the crop needs it. The goal is a healthier, more resilient and more manageable crop. Possibly even an increase in yield.

Trial design
In Europe, organic cultivation takes place inseparably from the subsoil. For that reason, Van der Knaap's R&D team has brought together the best of both worlds in this trial: the mineralization of organic nutrients and compost in the soil, supplemented with nitrogen mineralized by bacteria from the bioreactor (OWS). The research team is supported by organic cultivation consultant Wim van Marrewijk. 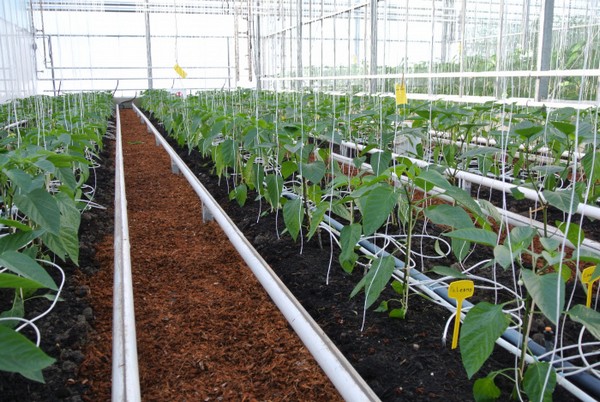 During this soil cultivation, the availability and absorption of mainly nitrate nitrogen come from various sources that complement each other well. Part of the necessary nutrition comes from a combination of green compost mixed with mulch compost that has been added to the soil. In addition, a nutrient solution with a low EC of mainly nitrate nitrogen from the patented bioreactor will be added. This can be done via drip irrigation as well as with the irrigation pipe.

Trial progress
Both varieties were planted at the end of January. During the first weeks, the plants have made their anchor roots in the deeper soil layer and a good balance has been established with the biological control agents. The compost has been absorbed into the soil and stimulates soil life. The last few weeks, the plants have been receiving nutrient water from the bioreactor with a nitrogen base. Van der Knaap keeps a close eye on the EC values. During the trial, the influences of the nutrient rich water will be accurately measured by carrying out regular plant sap analyses.