"A coherent strategy for organic is essential"

OF&G CEO, Roger Kerr, believes that Brussels has set out a clear agenda and strategy that acknowledges the multiple benefits and public goods that organic systems simultaneously deliver. The plan is also being supported with an €86m fund to promote organic and sustainable farming within the EU and globally in 2021.

“Our European neighbours are certainly putting their money where their mouth is,” says Mr Kerr. “The new Organic Action Plan sets out clear objectives to capitalise on the opportunity that organic represents. It showcases a coherent approach to policy making, which starkly contrasts with our own government’s drip-fed responses.”

OF&G is calling for the development of a detailed national action plan for organic that encompasses food, farming and the environment. An approach that has previously been recommended by the Government’s own advisors in a Treasury commissioned report, The Dasgupta Review.

“A much more frank and meaningful dialogue with organisations throughout the sector and beyond, would be advantageous to everyone with an interest in the future of our food supply and in tackling the ecological and climate crises,” continues Mr Kerr.

“Ultimately, farmers need assistance and assurance now. For organic growers we know that organic premiums on the retailer shelf are often not reflected in farm gate income and with new restrictions on farm payments starting to hit the pockets of farmers, with some leaving the agriculture sector. The SFI and ELMS could be hugely ambitious in their scope, if only government had the appetite to make it so. Were organic to be recognised along the lines the EU are doing, as the only internationally recognised and legally defined agroecological approach, our nation would be in a much more resilient position over the coming decades. 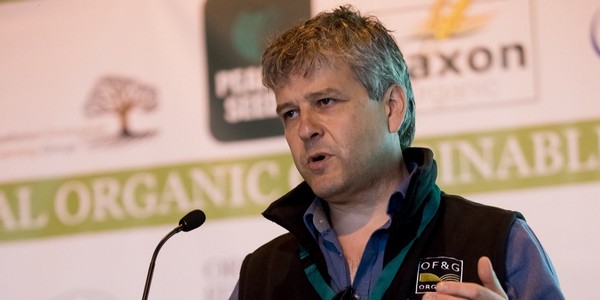 “At the moment, the responses we’re receiving to fundamental questions just gloss over the issues with parliamentary rhetoric, which appears to demonstrate a lack of foresight and real ambition in supporting agroecological approaches.

“An integrated policy framework that unites the Food Strategy, Biodiversity Strategy and Climate Strategy would truly optimise the benefits for everybody.  We hope the upcoming publication of the National Food Strategy, led by Henry Dimbleby, will finally set out some clear objectives around how we develop our food system.

“Reading the interim report, this would place greater emphasis on organic food and farming than is seen in the Government’s current direction. The DIT are keen to support the trade in organic food, it would be great to see Defra and other Departments actively embrace the opportunity too,” concludes Mr Kerr.