Another great finish for the Finnish

The total cucumber acreage in Finland is only 53 hectare and although that might not seem too impressive, the growers last year managed to harvest 54 million kilo cucumbers out of this acreage - 54.063.00 kg to be exact. That's an average crop result of 102kg/sq m2 per year. What country could ever top that?

The Finnish have harvested record yields for many years by now. Earlier this year, Jyrki Jalkanen with the Finnish Glasshouse Growers' Association explained to us that the growers that opt for year round production, grow with lights above and between the the rows and cultivate three crops per year. "By interplanting and depending on the schedule of the grower, they can harvest up to 46-47 weeks per year. That enables some of them to get even 250 kg at highest so far per year per square meter.” 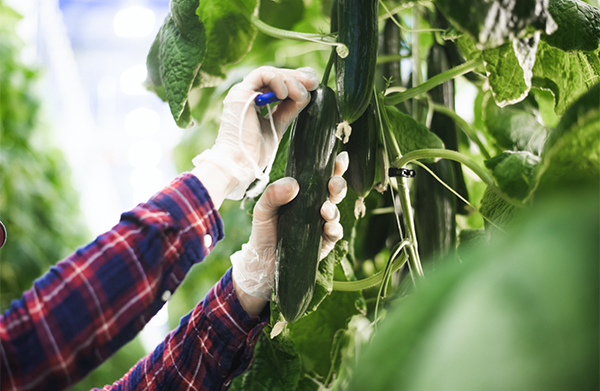 Since not all growers use these techniques, the country's average harvest is lower - but still very impressive. The production of greenhouse cucumber increased by six million kilos from 2019, showing an increase of up to twelve  per cent.

"This is a great increase, and due to covid-19 all domestic products have been very much in favor of consumers. This running year 2021 looks like the high demand of domestic cucumbers stays good. And if no problems will come out, we might reach again a new record this year!" Jyrki shares.

In terms of sales, increases in eating at home increased the consumption of domestic cucumber. However, the coronavirus year was difficult for many enterprises specializing in products intended for institutional kitchens because they had to quickly rethink their sales channels. 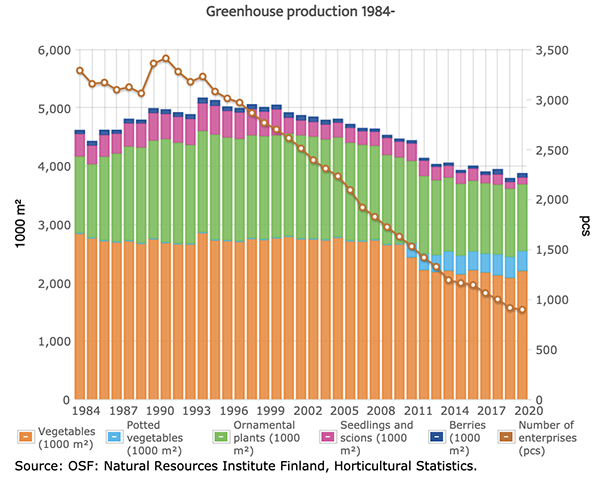 Statistics whereabouts
The numbers are collected by the Natural Resources Institute Finland and growers are obliged to share their statistics. They have been for many years, resulting in extensive data on the horticultural development within the country.

From the numbers it becomes clear that like in many other countries, upscaling is a trend in the Finnish horticultural industry. Back in 2011, there were 1,627 companies active in greenhouse cultivation. Nowadays there's only 896 left. Over the same period the total greenhouse acreage has decreased approx. 11 per cent: from 435 hectare a decade ago to 386 hectare last year, resulting in an average company acreage growth from 0,27 to 0,43 hectare.

The total greenhouse vegetable acreage has declined slightly over the last decade, although 2020 showed a small increase again. The total acreage for vegetable production within greenhouses is almost 220 hectare, with another 33 hectare dedicated to potted vegetable cultivation (including lettuce & herbs), 11 for seedlings & scions and 6 ha for berries. The total production is rising and was 101 million kilos last year. 41 million kilos were tomatoes, special tomatoes produced 6,1 million kilos.