Reducing food miles seems to be a no-brainer. Why produce food in one part of the world and then ship it to another? The truth is complicated, as is explained below. Godfrey Dol with Glasshouse Consulting has written a blog about the complex issue of reducing food miles, explaining why in his view, vertical farming is no relevant solution to reduce food miles.

Food Miles, Fact, or Fiction?
It seems unnecessary; freighting produce 1100 miles from Pensacola to Pennsylvania. Consumers see highways congested with trucks freighting produce and wonder why their food has to travel long distances. Food should be fresh, from pick to plate, right? It has even
sparked a so-called food revolution, giving rise to Vertical Farming. It promises to produce food in an abandoned parking garage in your city. 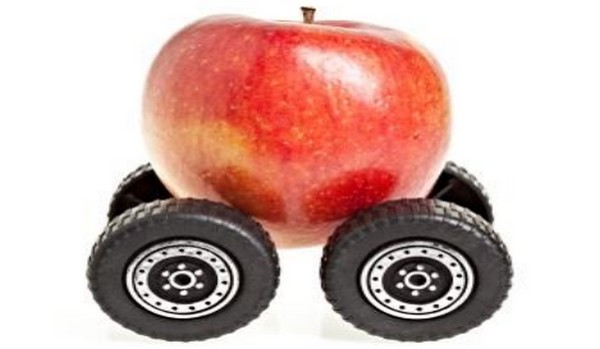 So why are we growing food so far away from cities? The Netherlands, a small country, three quarters the size of Maryland and three times its population, is the largest exporter of fruit and vegetables in terms of dollars. If they can grow so much produce in an
overpopulated country, why can't cities like Bejing, New York, and London produce their vegetables and save on food miles?

Land prices
The obvious reason is that land prices are high near cities. Farming takes up space, much space. In the Netherlands, the government intervened, allowing land to remain at a much cheaper price for farming than for suburbia. As a result, you can see cows grazing on land near freeways under the shadow of cities like Amsterdam, The Hague, and Rotterdam. While the Dutch have been able to keep large agricultural land areas near urban areas, it is much more complicated to transform existing cities.

With current production methods, every inhabitant of planet earth requires 2,000 square meters of Farmland. Incorporating this into existing metropolises means that a city like Los Angeles has to grow 7 times bigger if it wants to grow all of its food. We could save some
area by growing on rooftops of skyscrapers. But consider the environmental cost of pumping mega-liters of water dozens of meters up to the top of these buildings. And what about elevator food miles? I don't see New Yorkers patiently waiting for elevators tied up with bringing pallets of lettuce down from the 40th floor. Kidding aside, the production cost of small glasshouses is too high to compete with products from their larger colleagues in the country-side. The cost benefits of large-scale operations (management, automation) are lost
on the relatively small roof of skyscrapers.

Here we touch on another reason why consumers believe food miles are bad. There is a disconnect between consumers and how food is produced. Only 1% of the first world population works in the agricultural sector. In Australia, I met some European backpackers
who were surprised to find out that pineapples grow on plants instead of manufactured in factories. Many consumers think back to their grandparents, who had a vegetable patch that produced delicious produce. Many consumers want to believe that a farmer looks like the person in this photo.

Wrong image
In the consumers' minds, the farmer is a trustworthy middle-aged person who truly cares for their crops or animals. He works hard, and we can trust that the food he produces is safe. Many years ago, a Colombian coffee company realized the power of the relationship
between farmer and consumer. They branded their product with the name Juan Valdez, who represented the farmer. In reality, they hired actors to be the farming face for their products, who became national heroes. In the real world, a farmer is a savvy businessman who spends more time in his office than on the land. He relies on procedures to ensure his crop grows optimal and food safety is imposed by the supermarkets he supplies. He employs hundreds, if not thousands, of employees. In the last few decades, agriculture has become a manufacturing business.

Juan Valdez, another quintessential farmer, was represented by an actor.

In proclaiming food miles to be bad, consumers seem to want to go back to outdated farming principles. While currently, we need 2,000 square meters of Farmland for every earthling, the old-fashioned way of farming requires multiples of that number to provide everyone with food. We don't have the land, and it would cost us much more to produce. Farmers have been driving down costs and increased their productivity for decades. A kilo of tomatoes cost less than half today compared to 30 years ago, while production costs have gone up. The yields have increased as a result of breeding better varieties and developing better technologies.

Economical calculations
The disconnect between consumer and farmer results in the belief that our food can be grown locally. The consumer thinks that vegetables can be grown in little green patches in the cities, rooftops, and vertical farms. The reality is that it doesn't make economical sense unless the consumer is prepared to pay more. The organic industry is proof that expensive produce has a significantly reduced market share. These types of farms cannot feed the 9,7 billion people in 2050. It seems a contradiction that consumers want to reduce food miles but are prepared to accept produce grown in vertical farms under lights that are much more energy-intensive. The future is still in large-scale farms where produce can be grown in the right climate.

In my industry, the glasshouse industry, the issue of food miles becomes even more diluted. Picture a glasshouse built on the edge of a city in a climate that requires cooling. Positioning the glasshouse 1,000 kilometers away from the city at a cooler location that does not
require cooling reduces the energy footprint to such an extent that food miles become irrelevant. I did exactly that when I convinced the Costa Group in Australia to build a glasshouse in the little town of Guyra, far away from the big cities. The company is expanding to 40 Hectares, leaving little doubt about climate's importance for locating a
glasshouse.

Every business makes its calculations on which location they should choose. For some, it makes sense to be closer to cities; for others, it isn't. Increasingly, the energy footprint plays a role in the decision-making process. While food miles have left an emotional imprint on
consumers, the truth is that food miles only play a small role. The fossil fuels used for producing food and packaging materials far outweigh the energy used in food miles. It is why successful businesses have largely ignored the issue of food miles and why vertical farms that proclaim to have reduced their food miles are struggling to attract a necessary premium on their products. Tomatoes are grown in Florida to supply the Northern US states in the winter. It is because the consumer demands tomatoes in the wintertime. In the
greenhouse industry, tomatoes are produced in Mexico in winter because natural sunlight is far better than in the Northern United States. Until energy becomes cheap (and green), this remains the case. For some farms, food miles may be fact, but for most, it is fiction.