The UK government has issued a statement saying the volume of freight exports from Great Britain to the European Union has returned to normal, in spite of the new post-Brexit barriers to trade with the EU and restrictions related to the pandemic. Its internal data shows that the flow of roll-on roll-off freight going to the EU in early February was at 98% of the levels seen during the same period in 2020.

But experts claim the picture is more complicated, with a much larger number of lorries returning to the EU empty in 2021. That means the value of freight exports so far this year will have fallen. Also, , comparisons with the same period last year are not ideal, because it also saw disruption of normal trade patterns, as the UK prepared to leave the EU.

Government data shows that the number of lorries crossing from Britain to the EU is now close to what officials would expect. But if far more of them are empty, that doesn't help very much. The government's definition of volume of trade includes lorries that are empty.

At the start of the year trade was down sharply, but it is improving. The Cabinet Office says the outbound flow of lorries across the Short Straits in January was 67% of 2020 levels, and in the first half of February it was 85% of 2020 levels. That's still quite a significant drop, but things are clearly getting better as many businesses adjust to the new red tape and costs for trading with Europe.

As reported on bbc.com, Covid-restrictions have played a big part in the slow start to the trading year as well. There was also significant stockpiling in December, as businesses prepared for the changes with the EU.

Empty lorries
The government calculates that in normal times, about 30% of lorries which have brought goods into the UK from the EU return empty. So far this year, this number has risen to about 50% - but it is now beginning to fall. 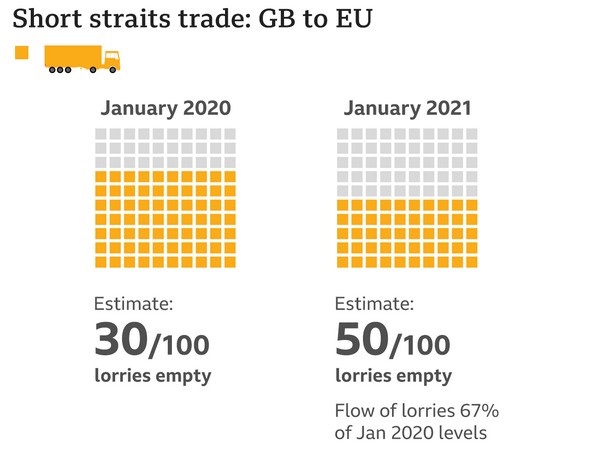 When it comes to the Dover to Calais route, using the government's own estimates to make a rough calculation, the number of full lorries carrying exports to the EU in January was about half what it was a year earlier. The calculation for the first half of February is better (over 60% of last year's figures), and the government is confident the numbers will improve. But we will have to wait until March to get official trade statistics for January, which will give a precise picture of the value of exports to Europe.

In the end, the value is more important than the volume.