Study on efficient water management in US agriculture

Every farmer needs adequate water for their crops. In some U.S. regions, farmers must rely on irrigation to have enough water for their crops. The 2017 Census of Agriculture reports farms with some form of irrigation accounted for 54% of the total value of crop sales (PDF, 121 KB). With water being such a vital resource for the U.S. agricultural sector, understanding water management and supply organizations is key to helping policymakers make decisions to support irrigated crop production. 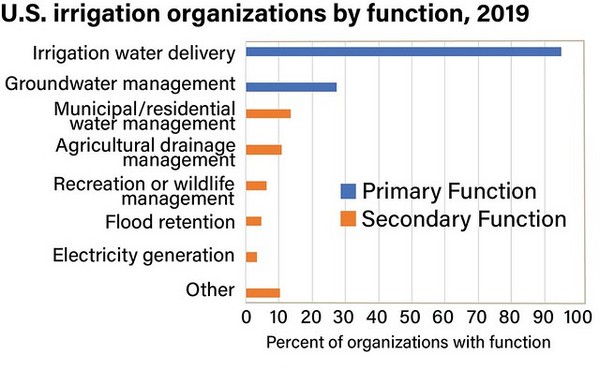 The Economic Research Service (ERS) and the National Agricultural Statistics Service (NASS) jointly developed and conducted the 2019 Survey of Irrigation Organizations (SIO) with the support of USDA’s Office of the Chief Economist. The SIO was the first federal, nationally representative data collection effort focused on irrigation organizations since the 1978 Census of Irrigation. In 2019, there were an estimated 2,677 irrigation organizations in the United States.

Irrigators often rely on local organizations such as irrigation districts, ditch companies and groundwater districts to manage or deliver water. The SIO data provide a better understanding of the services provided by irrigation organizations and include the following findings:

Ninety-five percent of irrigation organizations deliver water to farms as one of their primary functions. Water enters an organization’s system as diversions from natural water bodies or as deliveries from larger federal, state, or local water projects.

More than one quarter (27%) of irrigation organizations are involved in some aspect of groundwater management as one of their primary functions. This generally involves monitoring aquifer conditions and developing policies to encourage groundwater stewardship.

Since these are the two possible primary functions for irrigation organizations, these numbers indicated that about one fifth (22%) of organizations, both deliver water to farms and manage on-farm groundwater use.