At the end of 2019, Kwekerij Moors in Asten took a new five-hectare greenhouse into use. To optimize the light penetration into his crop, pepper grower, Rob Moors opted for diffuse glass. At the same time, he invested in two Luxous 1147 FR screens from Svensson. The latter turned out to be the right choice: Moors optimally saves energy while still guaranteed a maximum amount of light in his greenhouse. Nursery Moors currently comprises 19 hectares of sweet peppers, spread over locations in Asten and Someren.

"In Asten, we have 13 hectares of greenhouses in which we grow red peppers," says Rob Moors. "Our location in Someren has 6 hectares and is reserved for the cultivation of yellow peppers." The last expansion took place in 2019 when five hectares were added in Asten. This was done at the request of customer Van Oers United, who needed extra red peppers". 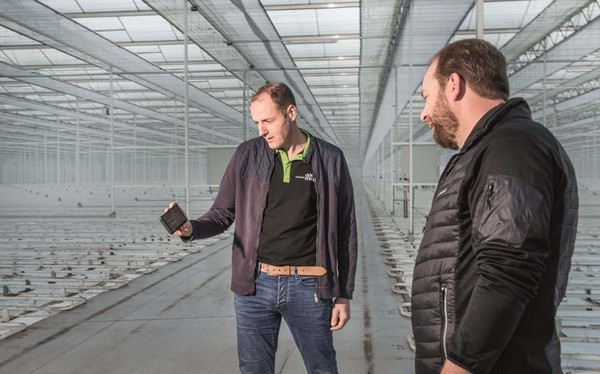 "We naturally wanted to furnish the new greenhouse with the latest techniques. Since light is a determining factor in greenhouse vegetable cultivation, we also decided to explore diffuse glass possibilities. More and more pepper companies are investing in this.

The fact that the light penetrates deeper into the crop results in higher production. But there are also disadvantages: due to the AR coatings, the light transmission is higher, and you also get more UV light".

Most translucent energy screen
To protect the crop against too much light in the summer months, Moors opted for diffuse glass with a single-sided AR coating on the inside of the glass.

"This allowed us to chalk the glass - which has a haze factor of forty percent - if necessary, to shield the excess light in the summer. So we knew that we probably had to screen more and earlier in the summer months. That is why an energy screen with a high light transmission was crucial. For this reason, we chose the Luxous 1147 FR screen from Svensson."

Luxous 1147 FR is, according to Svensson consultant Ton Habraken, the most translucent energy screen on the market.

Production increase in spring
The choice made pays off, especially in winter and spring.

"Thanks to the Luxous 1147 FR screens, we save maximum energy in winter, even a little more than with our other energy screens. At the moment, I cannot give precise savings figures yet," says Moors.

"At the same time, the plants receive more light. This results in a fresher and more vital crop. This also allows us to maintain a slightly higher 24-hour temperature and thus accelerate crop growth. This contributes to higher production; we get just a little more out of the crop. Until the summer, we had a head start in terms of production. But it is still difficult to substantiate this with concrete figures; for that, we need to gain more years of experience. We also actually see throughout the year that the crop is a bit more active. This results in a greater water absorption; after all, a more active crop evaporates more."

In the summer months, as Moors feared, the diffuse glass does result in too much light in the greenhouse. This means that he must close his screens earlier to avoid burns.

"In our greenhouses with clear glass, the screens do not close until the afternoon. In the greenhouse with diffuse glass usually already in the morning. We focus on fruit temperature. When it rises, we first start venting a little harder. If that works insufficiently, we close the screens. This usually happens at a fruit temperature of 43 degrees. Because we have to screen more, the production increase will level off in the summer months."

Summer screens on the rise
Habraken indicates that new diffuse glass types with AR coatings often result in too much light during the summer months - more and more pepper growers.