Invasive species threaten waterways, wildlife and native plants throughout North America. Biologists at McGill University in Montreal are examining the characteristics of these invaders to gain a better understanding of their impact on ecosystems.

It’s one of several projects researchers have conducted in the university’s Conviron chambers over Mark Romer’s tenure as the manager of McGill University Phytotron in the school’s biology department. The chambers have opened opportunities for researchers to perform a wide range of experiments in a controlled environment. Romer’s experience and collaboration with Conviron provided the foundation for creating an operating model for phytotron management.

In recent years, improvements to sensing capabilities have provided the consistency and reliability that scientists need to successfully complete their experiments, Romer says. Romer and his department’s management of the chambers has served as a model for other phytotrons around the world.

The early years
Romer arrived at McGill in 1987. In his first year, the university acquired 16 Conviron chambers—all were either the PGW36 or E15 models. There was a strategic reason for having only two models. The scientists wanted to minimize variability so they could replicate their experiments.

After a successful funding campaign, the phytotron department purchased several more large chambers and some smaller chambers to accommodate experiments with smaller organisms. Today, the department has a mix of Conviron chambers ranging from 7 ft2 (0.65 m2) to 40 ft2 (3.7 m2) in growth area.

“We’ve been using all of them for a wide range of research projects,” Romer says. “But in terms of my own experience, one of the things that made us unique at the beginning was that we were one of the first facilities to use central management of our chambers and facility.” 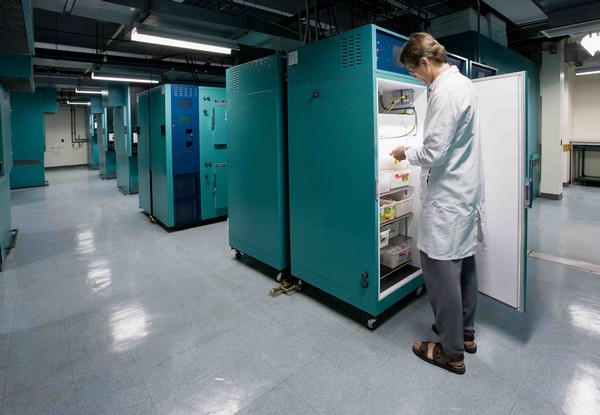 Centralized monitoring and control
Conviron’s central management allows researchers and facility managers to operate a single chamber or manage an entire fleet of plant-growth environments from a central workstation and from remote devices connected through a local area network or the internet.

Using Conviron’s central management software allows the department to oversee all the reach in and walk in plant growth chambers at McGill.
“Not only did we have remote access from outside the university, but it also directed how we would manage and run the researchers on the project, and we developed a whole protocol for running a research facility in a central way,” Romer says.

Prior to the construction of the new Phytotron, chambers were typically available to a single professor who would own and manage them independently. Instead, the Phytotron opted for a centrally managed framework where staff maintain and rent chambers to researchers on an as-needed basis. Using Conviron’s Central Management software allows the department to oversee all the units, enter and save programs and manage bookings on a calendar.

This approach has helped the biology department balance its maintenance budget and make chambers more widely available to all researchers. The success of the program led to consultancy and speaking engagements around the world, including helping the India Agricultural Research Institute establish its first national Phytotron in New Delhi, Romer says.

Reliability drives success
In recent years, Conviron has made advancements to central management that have enabled even more capabilities for the McGill phytotron. Improvements to sensors have resulted in more consistent environmental control, monitoring and maintenance for Romer and his team.

Newer control systems, such as the CMP6000, include microchip sensors to measure humidity and solid-state sensors for CO2 monitoring. Light sensors send information back to the controller to dim or increase lights to ensure a consistent level of desired intensity, according to Romer.

“I thought feedback loops on the lighting were a great development,” he says. “Every aspect of the environment should be regulated by a sensor and the control software. We should leave very little to the human to do because, as we know, humans are erratic and not overly reliable in checking things routinely.”

Romer and his team can view the environmental status from the office or remotely at any time. The real-time information allows them to make adjustments or stop chambers if they identify any issues.

While the department has added some new chambers over the years, some units are more than two decades old and still performing at a high level.

“We’ve had very few experiments lost because of equipment failure,” he says. “Because of the presence of the central management software, we know within minutes, or certainly very quickly, if we’re having a problem.”