the answer is yes

Can LEDs affect the taste and smell of vegetables?

There is a widespread misconception that the taste of vegetables is solely based on genetics of the plant species and cannot be enhanced by cultivation techniques or environmental conditions. "That would be true in a scenario where other cultivation parameters were universally normalised," the team with Valoya says. "However, this is rarely the case when it comes to indoor vegetable production facilities. The cultivation outcome is always a matter of compromise between profitability, yield and produce quality."

More often than not, the vegetable grower is only paid for the yield and improvements in crop quality are not regarded as important. "This line of thinking however has been challenged by local producers such as vertical farmers. Using modern cultivation techniques they manage to locally produce high quality crop and bring it to the market."

Having optimised lighting can seem to increase the investment cost, but according to the researchers, having fit-for-purpose, finely tuned LED lighting such as Valoya’s AP673L spectrum, can also make the growth cycles significantly shorter than with generic white or pink LED lighting.

More on real-life cultivation and the advances of using photobiological lighting in a vertical farming system in this article.

Quality
So, what is quality after all? Is it taste, smell, color, looks, firmness or something else when you think of leafy greens, herbs and vegetables. These before mentioned organoleptic properties are hard to compare, as they are something that will be differently evaluated by different persons. Luckily, we have some parameters that can be used to make clear comparisons.

Post-harvest maturing
In a study done by the University of Almeria in Spain (Najera et al. 2018) the post-harvest maturing of tomatoes under different light treatments was investigated. Raw tomatoes got the red coloration under all light treatments but the redness (lycopene content) was highest under LEDs which also had far red in the spectrum. "The best coloration came with the higher red to far red ratio (R:Fr) in the spectrum (Valoya’s AP673L spectrum)," the team points out.

Also, the firmness of the tomatoes, measured with a fruit pressure tester, was enhanced under the previously mentioned spectrum. This same light spectrum had also earlier shown to increase antioxidants in basil (Schwend et al. 2016). "This increase in the antioxidant content in the consumed produce brings a vast variety of health benefits for the consumer but it also protects the plant itself from fungal pathogens like downy mildew. The particular smell enhancement of increased rosmarinic acid content, anti-inflammatory health benefits to the consumer and pathogen resistance can all be considered quality enhancements caused by the right spectra selection."

In Valoya’s internal plant trials a lot of know-how has been accumulated about other qualitative enhancements caused by the photobiological spectra such as AP673L. "For example, shelf life is enhanced by higher dry matter content of the leafy greens. When the plant has higher content of fibers and less water the produce stays fresh looking for longer periods as drying takes longer time. Total phenolic amount is associated with flavor and smell of the vegetable and this is also increased with the finely balanced light spectrum. "

Taste of the vegetable is a trickier thing to measure of course as tastes vary but this has also been done in the Valoya internal trials where taste points were given in a blind test. All the results have indicated to the direction that the photobiological light not only enhances the yield but also enhances the quality and the taste of vegetables. 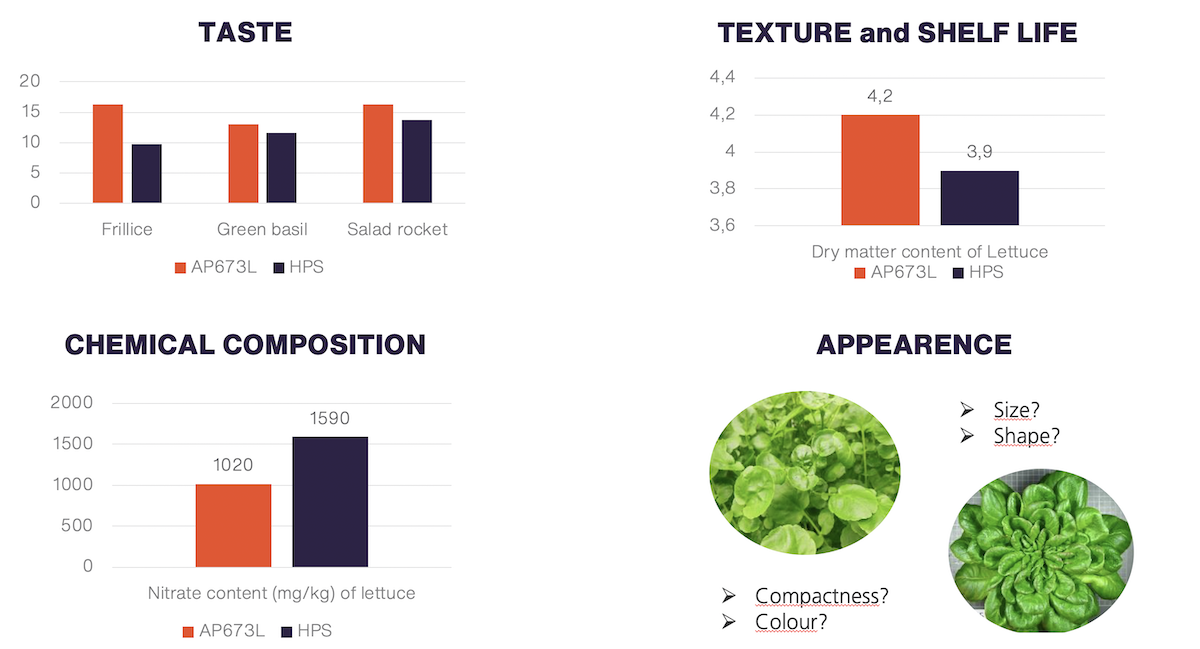 Read more on quality enhancing via lighting on valoya.com