January 2021 has brought change to the municipality of Leamington, Ontario as the Greenhouse Light Abatement Bylaw comes into effect. The bylaw comes shortly after Kingsville enacted its own light abatement regulation, and in response to concerns over light pollution. Under the new bylaw, greenhouse operators must either shut off greenhouse lights from one hour before sunset until one hour after or close curtains on greenhouse sidewalls, end walls and the ceiling.

With the bylaw only allowing 10% gapping in ceiling curtains between 2 a.m. and 6 a.m., the greenhouse industry has criticized the bylaw for not considering ventilation realities. Although the bylaw remains somewhat controversial, it has certainly kept greenhouses operators and equipment suppliers busy. Excalibur Plastics, for example, is a supplier of screening materials among other equipment. After noticing trends towards greenhouse light abatement roughly five years ago, the company decided to expand their product offering to include screening materials. 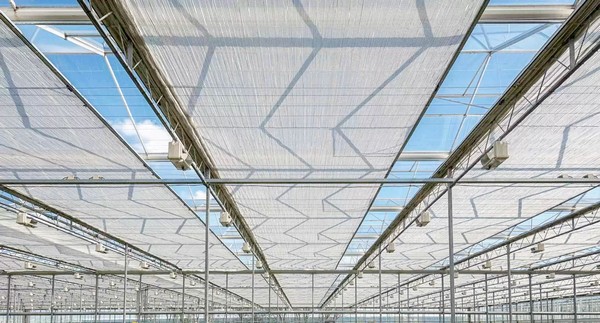 Providing screen materials
“We knew that it would become really important, so we decided to get involved early and perfect everything for the growers. We buy the cloth separately, then build the system and provide the labor to install it.” The decision to provide screening materials is not the first proactive move by Excalibur Plastics, the company made an equally proactive decision to offer more advanced plastic glazing materials despite glass being the main material used in southern Ontario at the time.

According to David, most greenhouse builders include light abatement systems as part of a new turnkey greenhouse. But for greenhouses not initially equipped with such screens, installing light abatement wall systems can be especially challenging in poly greenhouses. With its expertise in after-market installations of screens, Excalibur Plastics is considered a leader in greenhouse retrofitting.

Light abatement bylaws
The recent enactment of light abatement bylaws in Leamington (December 2020) and Kingsville (October 2020) has kept the Excalibur Plastics’ team especially busy with installations, although David explained that many growers installed screening systems prior to the bylaws’ enactments.

But like most people involved the region’s greenhouse industry, David suggests that the bylaw is not perfect and that light abatement must be an ongoing conversation between greenhouse operators, municipalities and residents. In both municipalities, the 10% allowable gapping of ceiling curtains during the night remains a point of concern. “Growers, municipalities and communities need to come together and work out this out. Growers will need more than the 10% gapping allowed at night, while residents need to have their night skies.”

To learn the specifics of the bylaw, follow this link