The idea for a new machine often comes from a manufacturer looking for a solution or from a machine manufacturer who sees a gap in the market for a new application. This time, however, it was the distributor who came up with an idea and worked it out into a concrete machine together with the manufacturer. The result is a sweet pepper de-coring machine aimed at the middle segment of the market.

“The idea came to us when a well-known Belgian manufacturer of salads, among other things, started expanding,” says Menno Jongsma, director at Synergy Systems, in the autumn of 2020. This company designed this hygienic machine together with Hitec Food Systems. “They also use bell pepper cubes for their salads, but not in such large quantities. There was a need for a somewhat more compact and price-technically more interesting de-coreer than the existing machines that were on the market at that time for cutting the peppers fresh in-house. 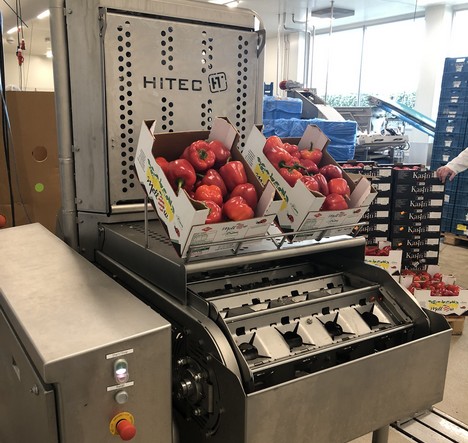 At Synergy Systems, we therefore saw a gap in the market for the (higher) middle segment of the market. We therefore approached our partner Hitec Food Systems, for whom we are a dealer in the Benelux, whether they could adapt an existing HiTec machine in such a way that we could also use it to core peppers. They set to work on it, but it turned out to be easier said than done. However, this has ensured that we have triggered a whole development process at HiTec Food Systems for the design of such a machine that we now actually have in the range and which for HiTec, as an additional advantage, can now also be sold via the worldwide dealer network of HiTec and Kronen. "

Cut fresher for smaller batches
The coring machine, in which the peppers are also halved or quartered, now provides an alternative on the market for cutting peppers. “Previously, they either had a lot of manual work (about 6-8 people for this capacity), or at the larger processors the peppers were cut completely and the residual materials such as the seeds, the core and the stalk were only filtered when washed.

With the new coring machine, we can now clean the peppers with just 1 person and then process them without having to filter out all the unwanted material. That saves a lot of time and makes cutting peppers even more interesting for smaller parties, such as those often seen at companies that put together meal salads. Which brings us to the second point. With this machine, you are no longer dependent on the producer of semi-finished products for smaller quantities, where you have to sacrifice perhaps 1-2 days of freshness. After all, you can now cut more cheaply yourself.”

Capacity
“The efficiency is also greater, for example we are above 80 percent efficiency with this cutting machine, which is a lot for such a coring machine. What also plays a big role is the capacity. This machine can core 4 peppers simultaneously with a total of 60 peppers in one minute (3600 pieces per hour). That is a lot more than manually with some kind of oversized apple corer. It also only requires one operator to put the peppers on the machine. The shape of this vegetable is often too capricious to do that mechanically. ” 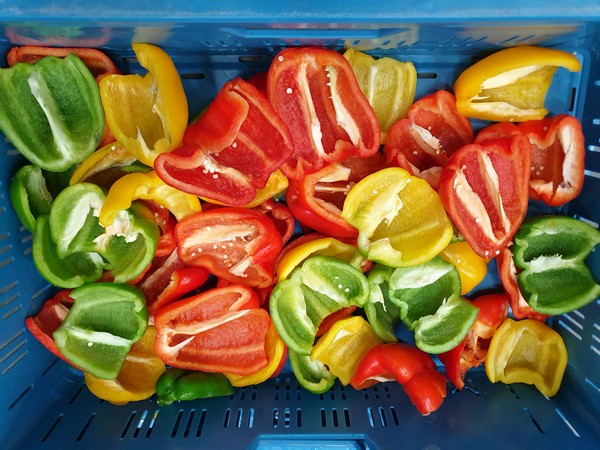 Challenges in the design
Although the machine has now been fully developed, there were still a number of bends in the course on the way to the end result. “With the first type that we launched on the market, we discovered that over time the core of the peppers sticks to the knife. This is due to a kind of sticky, syrup-like substance that comes out of the core. To do this, we reviewed the machine and devised a mechanical solution that removes any sticky pepper cores from the knife after each coring. These further developed machines are now running successful tests at various customers. It took some time, but that is part of the game when you pioneer a new kind of machine. "

Standalone or in line
This machine can not only be used standalone, but also comes into its own in a complete line for processing bell peppers. “We can completely unburden our customers and provide a complete line for processing peppers together with our system partners Kronen & HiTec. Machines at the front of the coring machine, which first wash the peppers and remove possible crop protection agents and unwanted bacteria / fungi / etc. and at the rear with machines for cutting the peppers for processing in meal salads or as a semi-finished product. In this way, the machine meets the current convenience trends in the market. Both when we look at the ease of cutting for the consumer and the ease of cooking and eating, when the pepper cubes end in the salads or stir-fry mixes in the store. ”

This article was previously published in the AGF Primeur trade journal.