Hans van der Waal: "I am, and always will be, a CEO with a green thumb”

His father owned a cow farm in the United States, but after 1970 he started getting back into the cultivation business. In the Dutch town of Hendrik-Ido-Ambacht, they grew cauliflower and broccoli outside and green peppers in the greenhouses. In 1990 the company moved to Zevenhuizen, where Hans and his father made the switch to pepper cultivation. At present, they have 8.3 hectares of red and yellow peppers, Hans explains in the Growers in the Spotlight-series of ZON Magazine. Jos Caubo went by to report. 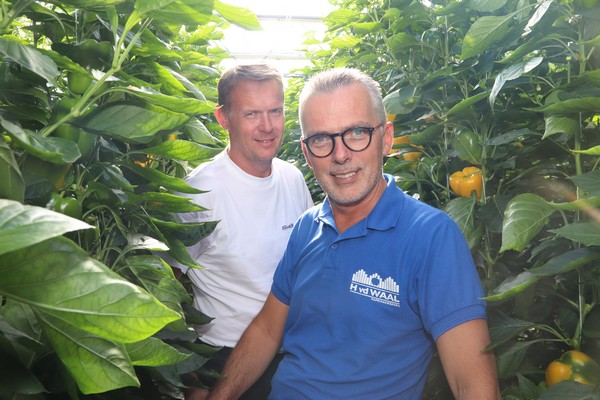 After going to Wim and José Tas in Zevenhuizen for the fourth edition of ZON Magazine, we once again return, this time to meet with Hans van der Waal and his wife, Jolanda. However, she will not join the conversation this time. Hans: ‘We run the business together. Nursery H. van der Waal is officially registered as a partnership where Jolanda and I share ownership. We can do this with the support of three foremen, of which Wim Hoogendoorn has now joined the conversation.’

Both men begin to laugh when I said I initially thought Wim was a co-director. ‘He isn't, but Wim is in charge of all communication with ZON, allowing me to focus on the cultivation, which is still my favorite activity. I’m not a grower who insists on doing everything on my own. We have made a good team here, one that I can trust most tasks to without being worried. Wim is mainly in charge of logistics, contact with ZON and Pamosa, and sales management. His two colleagues are in charge of the remainder of the work, including personnel matters and crop protection. We complement each other perfectly and are able to take on the tasks of the others if need be.’ When it comes to harvesting operations, the company works partly with temporary workers and, for the other part, with freelancers.

Homesick
In 1970, Hans’s father started his own cultivation company when he moved back to the Netherlands after having owned a cow farm in America for several years. ‘Partly because he was homesick and partly because he didn’t like the farm life in America, dad decided to go back to the Netherlands. He started an open field cultivation company growing crops like, cauliflower and broccoli, which were new products at the time. He also had a greenhouse of 8000 meters where he cultivated green peppers for Bakker Barendrecht. In the years after he expanded the product range with eggplants and the pepper cultivation was expanded’, Hans reminisces about the companies past.

When he was sixteen years old, Hans wanted to continue his studies, but his father believed he should first work in the company for a while. "In hindsight, I understand why he did this. We didn’t earn a lot in the first few years. We grew chicory during the winter months, which we sometimes ate five days in a row because we didn’t have much money to buy anything else. Luckily the company faced better times in the years after".

In 1990, the opportunity to buy a two hectares plot of land in Moerkapelle presented itself, and Hans and his father decided to build a new greenhouse there, making the shift to pepper cultivation. "Just think about it, with those two hectares of the greenhouse, we were the largest pepper cultivation company at the time; you can hardly imagine that now".

When Hans’s father turned 68 back in 2000, he figured it was time to pass the torch, and Hans was given the opportunity to take over the company. In 2004 the neighboring company went up for sale, with which Hans’s company could double in size to 4 hectares. "There was actually a pretty unique moment back in 2008 when I was able to buy the 8.3 hectares of ground here in Zevenhuizen and sell the greenhouse in Moerkapelle at the same time. That is the reason why Kwekerij H. van der Waal has been in this location since then, a location we are delighted with, I might add. At first with only yellow peppers, but recently with half of the grounds used for red peppers and the other for yellow", Hans says.

Dialect
During his final year in Moerkapelle, Hans was part of the Greenery, but right before his move to Zevenhuizen, he opted to join the ZON in the Dutch province of Limburg. ‘It took some time to get used to the Limburg dialect, but we did feel right at home at ZON from the very start. The growers from Limburg are sometimes a bit more emotionally connected to the industry and, at times, beat around the bush. Around here, we are normally more direct. But to me, ZON is a true growers club that works for the growers. Other sales organizations are often too close to a trading firm. Especially the transparency of ZON towards the growers is a good thing and is by far the most important to me.’

Although the company used to participate in the central sorting of peppers in the beginning, Hans and Wim, after a few years, made the conscious decision to do this themselves. Wim Hoogendoorn had the following to say: "As a grower, you look at different things when sorting, and we thought that we would do a better job doing it ourselves. Moreover, I really enjoy taking on a challenge like that as a company. We were very transparent about that towards ZON at the time, so not an ill word was spoken about it. That is also part of being transparent".

Wim is the person who attends all of the meetings of pepper growers club Pamosa. "A few years ago, relations between Pamosa and ZON were awkward, but over the past few years, things have smoothed out between the two. I always say a bit of tension keeps things interesting, but you shouldn’t end up in direct opposition with each other. You also need to ensure a good connection with your sellers, which I think everyone at Pamosa is now aware of", says Wim.

Clock
About 40 to 50 percent of Van der Waal’s product makes it to auction. What is that like? "It’s going well, and we would like to keep it like that. ZON’s strategy to also get Spanish products to auction is something we have nothing but support for because if that is what’s needed to keep your winter customers engaged, you should definitely do it. However, as ZON, you do need to make sure not to be in the way of your own growers by doing so. Overall, everything is running smoothly".

What does Hans (53) see for his company in the future? "Let me start by saying that I’m happy with how things are going at the moment. I am, and always will be, a CEO with green thumbs. It still makes me happy when I walk past the peppers in the morning, I take in the smells, and I see the crops are doing well. It’s in my nature. In terms of successors, one of our four kids finished horticultural education and now has his orientation at the company. So far, he loves it and shows an interest in one day actually joining the company. Who knows how things will end up". Hans smiles: "But I will not be giving it all up anytime soon. I’m still having too much fun!"