While there was a growth in the overall take-home consumption of vegetables during the past year, it was a different story for fruit items, according to one of Australia's leading consumer and markets data analytics companies.

Melanie Norris Associate Director from Neilsen told a PMA A-NZ Panel Discussion looking back on 2020 and the impacts of the COVID-19 pandemic that fresh produce categories were the top five drivers of grocery growth.

"Vegetables followed a similar trend to total groceries, with bigger baskets and an increase in average visits to the supermarkets," Ms Norris said. "This real home-cooking mentality took over Australia, and we saw the main growth drivers of veg were the staples of cooking; potatoes, onions and carrots. This was in contrast to fruit. We have actually seen a reduction in take-home consumption of fruit. You've got to remember that we are coming off the back of drought and bushfires, followed by COVID, so we did see a significant increase in fruit prices." Australia experiences a reduction in take-home consumption of fruit during pandemic year 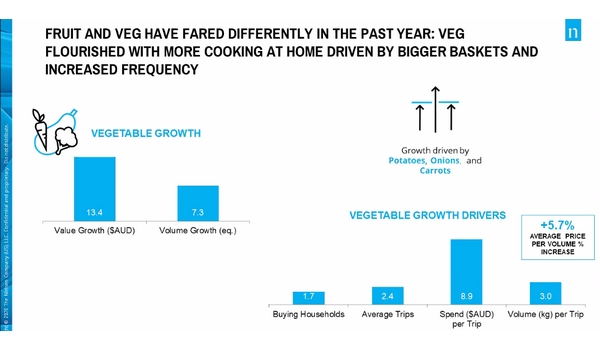 The data looks at the past year, from November 2019 to November 2020, using Neilsen Homescan. Ms Norris also noted that consumers were favouring pre-packaged snacks as opposed to the loose produce. This also helped drive online grocery sales, which has been accelerated by COVID-19.

"Potentially, people who were working from home, maybe aren't reaching for the fruit bowl but are reaching for packaged snacks instead," she said. "This may be an opportunity for fruit in the coming year to regroup and refocus. There really is a move towards pre-packed fruit and veg. If we look at major supermarkets, we can see that pre-packed makes up over half of the sales and it is interesting if you unpack fruit and veg (data), you can see that where we saw a decline in the volume for loose fruit, we saw pre-packs increasing. Veg increased in both. Potentially, because fruit was something you don't often cook, we just eat, maybe that was a barrier to some consumers. Another thing about pre-packs is that it has become an enabler for online sales; it is easier to shop and we don't have to worry about transportation." 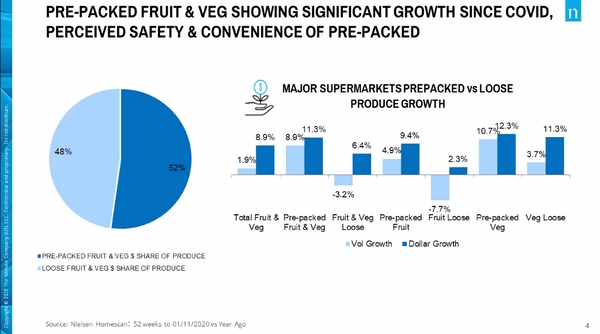 Merchandise Manager for Fruit at Woolworths, Warwick Hope says the major supermarket company noticed a "huge change" in purchasing behaviours from March 2020, when lockdown restrictions began to be discussed, then were introduced, across Australia. Particularly, there was a reversal in the long-term trend of customers making more frequent purchases, with smaller basket sizes, to making more bulk purchases in fewer trips.

"We had an absolute acceleration, picking up hard and fast in the staple categories," Mr Hope said. "It was almost irrational some of the behaviour we saw as customers really stepped down the Maslow hierarchy of needs; from inspiration or aspiration through to ensuring the pantry is stocked for six weeks. I think some of the advice circulated on social media was saying you would need food staples in your house in case you couldn't leave for 14 days. So, people maybe couldn't trust (perishable) fruit such as berries but will trust potatoes, carrots and onions. It really drove sales in those hard lines - and it almost happened overnight." 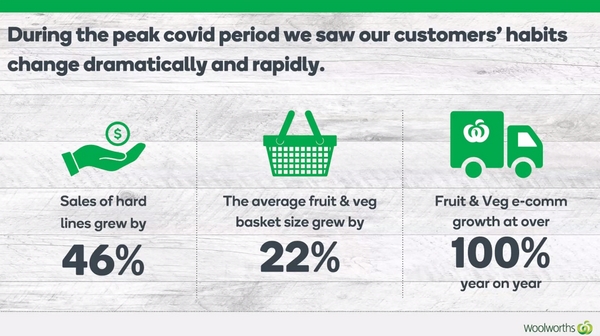 Mr Hope says trends have already started to normalise and is confident of a bounce-back in some of the categories that have struggled in 2020, as consumers look to "celebrate" again. Woolworths also experienced a doubling of its eCommerce sales during the pandemic.

"It is a small part of the business, but it certainly accelerated and the doubling in size presented us with many challenges," he said. "We were lucky as we believe that it is an important and large part of the future of retail. So, our business has actually invested in the growth; we opened 44 home delivery services, outside our original stores, while every one of our stores runs a click and collect business. We picked up an additional 44 sites for managing home delivery into the broader network. We have 92 dedicated pick-up zones in stores and we actually created four dedicated online hub stores. In Victoria in particular we actually closed some supermarkets to increase online capacity."

However, he warns that as financial situations for some consumers change over the next year, there will be a need for discretionary spending. So, food items, including fruit and vegetables, will need to have an emphasis on driving value.

"As more and more of the government subsidies and support start to ease off, some people will be more exposed to the economic challenges that they find themselves in," Mr Hope said. "It will be a very conscious piece and how value plays out over the next period of time. We have already seen this with 'Odd Bunch' (imperfect fruit and vegetables). There is some really strong demand in those categories and some interesting trends to play out." 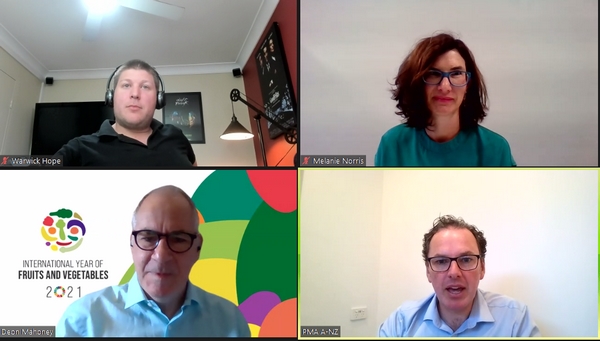 While pre-packaged fruit and vegetables have been popular in 2020, so has pre-prepared meal kits and convenience meals, according to Ms Norris.

"It has had massive growth this year," she said. "It is the number two growth category in online sales. It is that inspiration, it is that convenience. People are saying that they are tired of cooking themselves, so they want to treat themselves, especially when they cannot go out. So, they can't go out for dinner, but can get a meal kit with new recipes and it all comes handily packed, to make it easier."

Ms Norris also added that another opportunity for the industry following the pandemic was the overall health benefits of fruit and vegetables in supporting the body's immune system, with people turning to more expensive medicinal products.

"We are seeing people say that they are more interested in health and wellness," she said. "It's interesting that the most commented thing has been around things like supplements and probiotics, and things like that, rather than looking to the simpler and cheaper solution of fruit and veg. So, maybe there's a way we can message that stronger to people."

The PMA A-NZ panel also spoke about the food safety aspect of the pandemic and fresh produce packaging trends, which FreshPlaza will feature in an article next week.