As of today an energizing supplementary feed for the Koppert predatory mites is available in a handy 0.9 liter cardboard cylinder. Extensive trials carried out with Predafeed in Spain and the Netherlands, prove that this ‘snack’ can boost predatory mites to the extent that populations are increased by more than three times over.

Predafeed, based on the mite Carpoglyphus lactis, was developed by our R&D department in answer to a distinct need in the market. The supplementary feeding of predatory mites prevents populations of useful mites from diminishing or dying when there is a lack of prey organisms in the crop. Using Predafeed ensures that the population of predatory mites stays healthy and multiplies so that they do their job optimally in the crop. 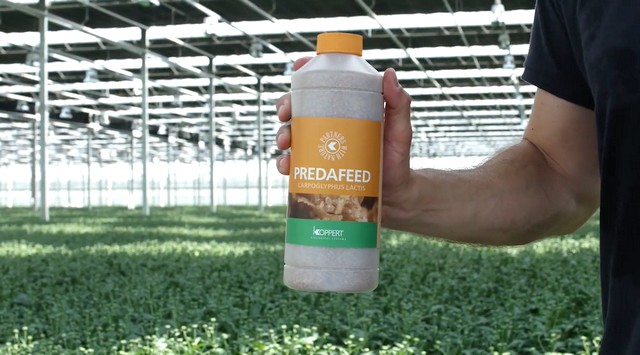 Four advantages of Predafeed:
• Higher number of predatory mites present before pests establish themselves
• Can be used in combination with a broad range of Koppert predatory mite species
• Doesn’t boost pests
• Same food source as that on which the mites are reared on

Extensive trials
Predafeed trials in Spain and the Netherlands have proven that the higher the dosage and application frequency, the greater the population growth. A total of 42 trials with Carpoglyphus lactis have been carried out since 2017 on crops that vary from chrysanthemum, rose, strawberry and citrus. In certain cases, a boost of up to 420% in the predatory mite population was recorded!