'Dutch and Belgian tomatoes constantly formed the basis of the range'

The basis of the tomato range was constantly formed by Dutch and Belgian offers, although their presence was limited overall. Meanwhile, the importance of Spanish, Turkish and Moroccan imports grew. Italy participated exclusively with cherry tomatoes. Rare domestic batches hardly generated any attention. Overall, the quality was generally convincing. If this was not the case, a wide price range was established, for example in Frankfurt, where Turkish TOVs cost between €5.90 and €8.50 per 5 kg.

Demand was sometimes friendly, sometimes rather restrained. The majority of the prices tended to go upwards. Especially Belgian meat tomatoes became immensely more expensive: in Frankfurt up to €20,- per 7 kg crates. In Hamburg, customers also had to dig deeper into their pockets for cherry tomatoes. Only in Munich did the distributors temporarily lower the upper price limits. 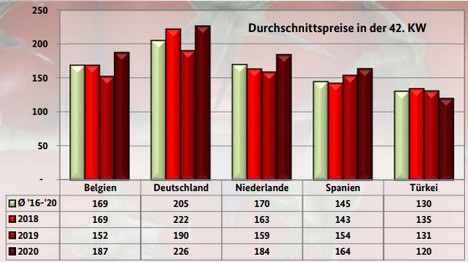 Apples
The availability was sufficiently adjusted to the accommodation possibilities. In some cases, the sellers lowered their receivables a little to speed up the handling.

Pears
Italy made its mark with Abate Fetel and Santa Maria and complemented the event with Williams Christ. The quality was generally convincing. Overall, the demand, which had risen locally, could be met without difficulties.

Table grapes
Although supply was limited, it was sufficient to meet demand. No uniform price trend was discernible.

Small-fruited citrus fruits
Clementines originated primarily from Spain: Besides Oronules, Clemenrubi were now also available. Satsumas from Spain, Turkey and Italy also often had to complain about color and aroma.

Lemons
Spanish supplies dominated over those from Turkish and South African goods. The supply was not insufficient. The high prices of the previous week stayed in place.

Lettuce
With iceberg salad, the presence of domestic offers was obviously and very clearly limited. but not always successful. Nevertheless, the prices remained more or less constant, merely fluctuating within the usual ranges.