Some goods are up as much as 300 percent

Vegetable prices in Nepal are skyrocketing

In Nepal, prices of vegetables have skyrocketed with as much as 300 percent in a month. And these skyrocketing prices have left the consumers deeply worried as this is happening at a time when many are losing jobs and sources of income due to the pandemic.

According to Kalimati Fruits and Vegetable Market Development Board (KFVMDB), the price of onion was Rs 51 per kg last month which has jumped to Rs 115 per kg and the price of potato has reached Rs 105 per kg. Cauliflower is being traded for Rs 115 per kg, spinach and green beans at Rs 110, spring onion Rs 155, turnip Rs 100, string beans Rs 110 and okra Rs 105 per kg. 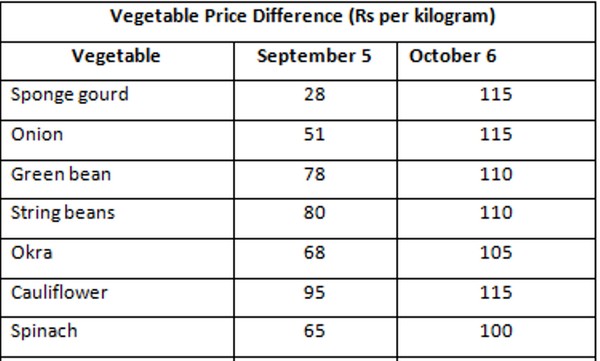 Bitter gourd’s price jumped to Rs 85 per kg from Rs 33, a rise of 58 percent. Bottle gourd is priced at Rs 67 and carrots Rs 98, according to the KFVMDB. Khom Prasad Ghimire, president of the Federation of Fruits and Vegetable Entrepreneurs said vegetable  supply has decreased due to low production.

Most vegetables are imported from India and the price hike in India, Bangladesh and Bhutan has contributed to price rise in Nepal. Binay Shrestha, spokesperson at the Board said the price is unlikely to go down until the new production is supplied into the valley.