'Presence of the Spanish and Polish peppers expanded'

The presence of the Spanish and Polish peppers have apparently expanded somewhat. As these were considerably cheaper than the Dutch lots, their turnover was quite brisk. In Berlin, however, the products from Poland left a few wishes unfulfilled with regard to their quality. The importance of the Dutch items was generally limited.

Due to the intensified competition, the sellers were still unable to maintain their prices throughout. Even limited deliveries from the Netherlands did not change this. The prices of Turkish imports often remained at their previous level. Yellow and red pointed peppers from Hungary only arrived in Munich. A few Belgian and very expensive domestic products rounded off the range of products on offer. 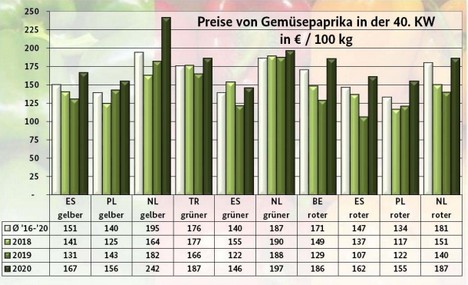 Apples
Customers were able to access a diversified product range based on local offers. Overall, prices tended to be somewhat downward, as availability was too abundant as compared to demand.

Pears
As a rule, the supply was sufficiently adapted to the accommodation possibilities. The quality was convincing and with an increased demand the prices often remained constant.

Plums
The season is gradually coming to an end: supply and demand were limited. Hauszwetschge and Presenta from the domestic market and Stanley from Moldova dominated.

Bananas
On the one hand, the inflow from the ripening plants was quite well matched to the not exactly exuberant accommodations. As there was no pressure to sell or limit supply, the distributors did not need to modify their prices.

Lettuce
Business was generally quiet. Although the supply was limited, it was sufficient to cover the demand completely.

Cucumbers
Because of the massive influx of cheap Spanish products, traders had to grant discounts on Central European batches if they wanted to avoid stockpiling.

Tomatoes
The Netherlands and Belgium dominated the event. Germany completed the business as well as Italy. The availability was limited overall.