A Belgian energy research team - led by the KU Leuven - has developed an agrivoltaic pilot project in Bierbeek. They specifically designed the system for orchard crops. The pilot is of the first outcome of a  technology transfer project funded by the Flemish government and co-funded by 20 unspecified companies. It is designed to demonstrate the feasibility of agrivoltaics in Belgium. The project includes the planned installation of two more agrivoltaic set-ups with bifacial solar tracking and fixed stilted structures by March 2021.

Researcher Brecht Willockx explains how pear trees are considered ideal for agrivoltaics, as they need protection from hail through the use of hail nets. “This is positive for the landscape pollution and social acceptance, as there is already a construction for protection that is being replaced by an active PV system,” Willockx said. 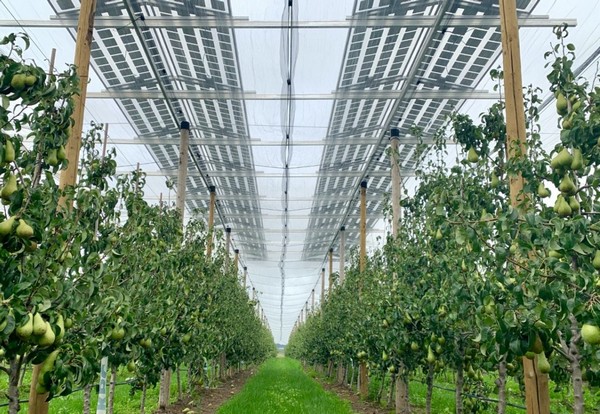 “To optimally protect the pears against hail damage, we placed our PV modules on top of the trees in well-considered domes,” Willockx explained. “This has a nice side effect that during certain moment of the day, the shade is ‘falling’ between the tree rows, while at the same time they are protected against hail.”

According to an article on pv-magazine.co¸ the solar modules, which were specially designed by the research team, were placed at a height of 4.6 meters, based on the height of the agricultural machinery that is commonly used for pear trees. The selected modules feature transparent backsheets and conventional, equally spaced 156 x 156 mm silicon cells with 21% efficiency.