New greenhouse Koppert Cress: not full, but it will be surprising

Tomato growers out of the greenhouse, Koppert Cress into the greenhouse, but with what? That was the question during the announcement at the end of 2019, and also still in June, in the middle of the Corona slump; but now Rob Baan and his team know what will be grown in the new greenhouse next year. Baan, somewhat mysteriously and with a smile on his face: "Expect surprising products, as people are used from us, which should not be possible but which we are going to do anyway."

Compared to the same week last year, the cress grower is at 80% of last year's turnover, and they are 'incredibly proud' of this. Rob admits: "I had not expected it. Luckily, the Dutch trade did not forget us and chefs kept making use of us, better than I had expected when corona broke out."

And there was also sufficient support from the government, for which Rob has already expressed his gratitude before, including on Dutch television.

Creativity returns
Koppert Cress is, to use Rob's word, back on track. "The time of surviving is past and the creativity has returned to my team, and we can think about new things again, such as the introduction of sea grape Moai Caviar.

"We are turning a necessity into a virtue now traveling is more complicated and local for local seems to become important again. Other cultivations are made possible because of this." 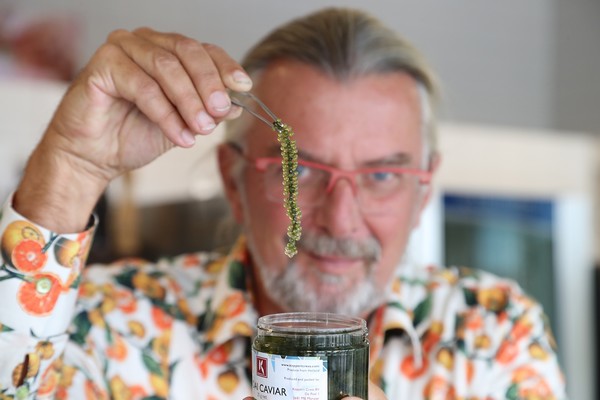 The sea grape Moai Caviar was introduced at the beginning of September.

In the middle of the corona crisis, this kind of thing simply was not possible, with everything going on. "Thinking about what to do with a new greenhouse was not a question at all at the time."

Adjust greenhouse internally
But now that is possible. Another final question: What will be grown in the greenhouse? "No tomatoes, but no one would have expected that of us."

What is expected: the greenhouse will be converted, although not much will be visible from the outside for those who pass De Poel this winter. "We will adjust the 4 hectare greenhouse internally to grow new, special crops. The greenhouse will not be completely filled immediately, but the rest will be shown this spring. Mark my words."