It is the middle of summer, so it is very hot in the greenhouse. But does all the hard labour yield something for the grower? In most cases it does with the (slightly) rising prices since the beginning of August, with the exception of tomatoes and courgettes. It remains difficult there, notes Benny Cuypers of BelOrta.

Tomatoes - still little movement in the market
In tomatoes some change would be welcome, according to Benny. Prices have been stuck at around 30-40 cents with both loose and truss. "The improvements in price, for example at the end of July, were actually relatively short throughout the season and so that is not really helpful. I think it is a sign that the market, especially now that all countries are in full production, is overcrowded."

With the extreme weather at the moment, the peak supply of tomatoes in about seven weeks could possibly bring change. "The heat undoubtedly has an effect on production, especially in tomatoes, which are just a bit more sensitive to heat than other products. It could therefore be that we will have less production in a while, although that remains guesswork for the time being."

Peppers - good prices with slightly lower volumes
The outlook in the short term for the other fruit vegetables is more positive. Peppers, for example, are going up in price. "At the moment there is some scarcity of green, so that product is very expensive at the moment, just like orange. There are sufficient red and yellow peppers, but the productions here are also not huge and so with a good demand here the prices are high. The price of 1.40-1.50 euro per kilo is good with the current volumes."

Cucumber - improving prices, decreasing volumes
Since the beginning of August there is an upward trend visible in cucumbers. "And about time too, all in all it has been difficult for cucumber growers this season. The good weather translates into higher demand and prices."

In the coming weeks, BelOrta expects lower volumes of cucumber on the clock. "Some acreage is going out of production, for example by growers with an autumn cultivation of tomatoes, so there is a chance of continuation of this upward trend in cucumber prices."

Eggplants - traditionally rising in price
An upward trend in price is also visible in eggplants. The price increase towards the second half of August is standard, Benny knows. "On the one hand, there is gradually less production due to less light, while demand is often good." 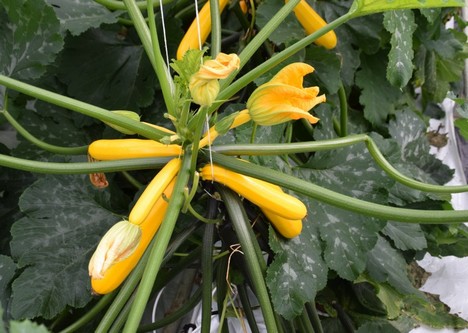 Courgettes - green very difficult, yellow also going down
This is different in courgettes, where the market situation has already been very difficult for a few weeks. "We hardly get good prices. In green the price fluctuates between 5-10 cents, while yellow is a bit better. Or actually it was, because where prices were around 70 to 80 euro cents before, those prices on Monday (40 cents) and Tuesday (11 August, 30 cents) have fallen again. The stricter corona rules in the hospitality industry don’t help."