Last June, Plant Empowerment gave a free webinar series of four webinars called 'Implementing Plant Empowerment, a profitable way to sustainability'. The four-part series attracted more than 1600 participants. Due to the success, the series is repeated. The recorded webinars will be broadcasted again including live Q&A, starting August 26th. The webinars are organized together with the Implementation Partners of Plant Empowerment and the authors of the book 'Plant Empowerment; the basic principles'. Participants learn more about the implementation of the theory in practice. 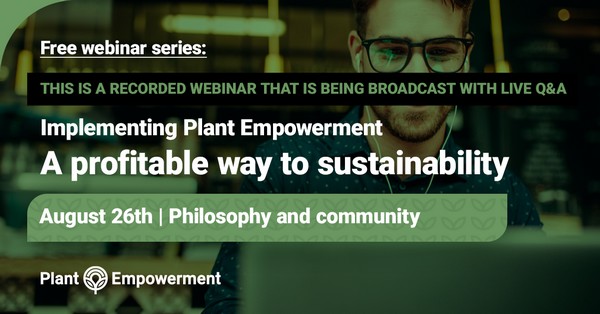 Free webinar series: Implementing Plant Empowerment
Last June the six implementation partners of plant empowerment; Koppert Biological Systems, Ludvig Svensson, Hortilux / PL Light Systems, Hoogendoorn Growth Management, Saint-Gobain Cultilene, LetsGrow.com, organized a series of four webinars. Over 1600 participants from all over the world joined of which almost half of them where grower. The feedback was very positive and Plant Empowerment received many requests to review the recordings. Therefore it was decided to broadcast the recorded webinars, starting at the end of August. Every week a webinar will be broadcasted including live Q&A with the Plant Empowerment experts.

At the end of this year Plant Empowerment will start a new webinar series. In this series the consultants and authors will go further into dept. The aim of this series is the same; helping growers and horticultural professionals to put the plant at the centre of the cultivation strategy by keeping the plant balances in equilibrium.

Did you miss the series in June? Join now and register via this link.