Many packhouses are looking to reduce the amount of forklifts operating on the floor and for that reason Somerset West-based Gossamer Packaging Machinery have designed an automated shuttle car for the circulation of empty and full pallets or bins without the use of pallet jacks or forklifts.

The shuttle car can be used in combination with other Gossamer equipment for example bin stackers, bin de-stackers, pallet magazines and pallet and bin holding stations, ensuring a streamlined operation within the packhouse, says the company. 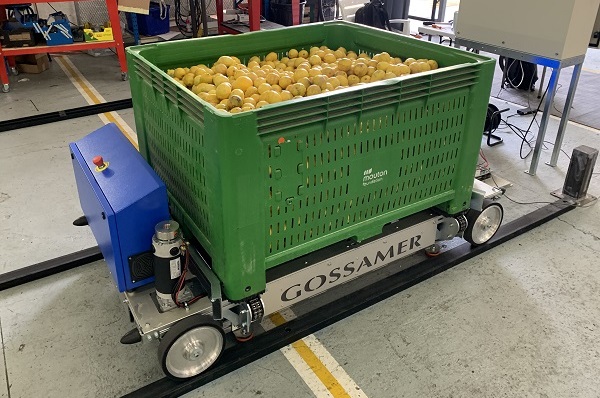 A Gossamer shuttle car has been installed in the citrus packhouse of Ambrosia Estates in Hoedspruit, to automatically feed empty bins into the 42 DBF-C citrus bin fillers. When Ambrosia Estates changed the layout of their packhouse two years ago, they installed a new sizer, and now they are sizing directly to the bin, which is not done at many packhouses.

After the success of their first shuttle car, Ambrosia Estates are planning to install another shuttle car to transport full bins to the bin tippers onto accumulation tables to auto packers PP-300 range.

The operation is fully automated with no personnel required, this system is ideal for situations where the transport of bulk fruit happens in space restricted areas, as in this case under conveyors. 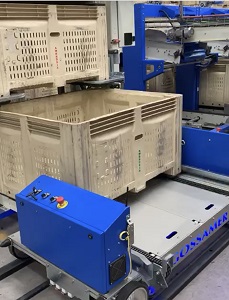 The shuttle car, that runs at 1.5m per second, is a Gossamer project that has been a few years in the making, as they took cognisance of the need for the automation of bin movement.

On some packhouse floors there are up to thirty forklifts moving about and each necessitates a driver who has to receive training every season.

The shuttle car runs on a lithium battery with a ten-year lifetime with 3,600 cycles.

Energy that would’ve been lost through braking, is converted from kinetic to electrical power, thereby assisting in recharging the batteries. When low battery levels are detected, the shuttle car returns itself to a docking station even during non-production times. Recharge time from empty about 5 hours, options of faster and slower chargers available.

It runs on a track and through the shuttle car gauges its position and stops very accurately in position.

There are three versions: one designed to move empty pallets around, another that can pick up to 2,400kg for full pallets and a third capable of moving double pallets, while retrieving the full pallet it can also load an empty pallet on the same run. Communication options include SCADA and integrated information systems, which will allow for real-time intelligent tracking of bulk product throughout the facility. 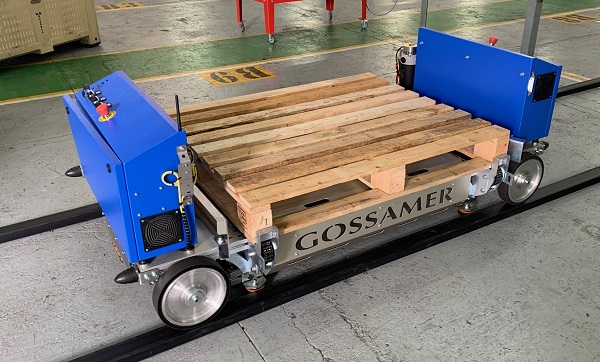 Gossamer Packaging Machinery was responsible for gantry systems at the Two-a-day apple and pear packhouse in Grabouw that packs from overhead as well as a robot operating over ten packing stations.

“We have machines running at Two-a-Day that have been running for more than 24 years without a hitch,” says Jeanette van Dyk, Gossamer International Marketing and Sales Manager.

In South Africa the company is a preferred supplier to corrugators and packhouses. Many of their dual stage carton Erector TE-800D, SEL-400R and PP-300 Pattern Packers are in use in Kenya, Israel and USA, with TZ-7 telescopic erectors in Egypt.

While their equipment is also employed in refrigerated meat, convenience foods and seafood facilities, in dairies, as well as in beverage and bottling plants (they’ve seen growth from the craft beer sector), it is from fruit that they derive most of their income.

“In the fruit sector and the beverage and bottling sectors, our clients will make changes to their packhouses because it is contract packaging, with a quicker turnover of projects than in the convenience food sector.”

Watch a video of the shuttle car in use.