To understand the distribution of the cultivable fungal community in plant tissues from nature farming tomato plants, in a recent study researchers sampled plants of seven different tomato cultivars and recovered 1742 fungal isolates from 1895 stem tissues sampled from three sites in Japan. 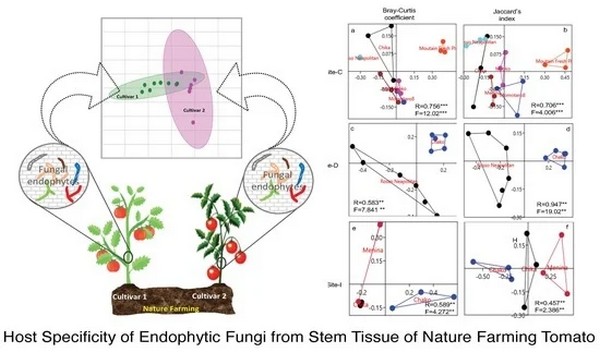 Overall, the isolation frequency was low (3–13%) and the isolation and colonization frequencies did not vary significantly as a function of the cultivar. The fungi were divided into 29 unique operational taxonomic units (OTUs) with 97% ITS gene sequence identity, the majority of which belong to Ascomycota (99.3%).

The dominant genera of cultivable endophytic fungi were Fusarium (45.1%), Alternaria (12.8%), Gibberella (12.0%), and Dipodascus (6.8%). The alpha diversity of the fungal endophytes varied among tomato cultivars. Ordination analysis performed to investigate patterns of endophyte community assemblages on the various cultivars revealed that host cultivars had a significant impact on the endophyte community assemblages in all the study sites.

Some of the taxa Fusarium, Alternaria, and Penicillium were found on all cultivars, while few were uniquely present in different cultivars. The dominant taxa may be adapted to the particular microecological and physiological conditions present in tomato stems.