Outbreaks of locust swarms in Africa, Asia and the Middle East have epitomised the essential need for indoor farming. Unseasonal rains caused by global warming, have aided the spread of desert locusts which would normally have died out in the dry season. Ethiopia and Somalia are currently experiencing their worst outbreak in twenty-five years, while Kenya is experiencing its worst infestation in seventy years. Erratic weather conditions and the locust swarms which ensue emphasise the need to fortify crops against damage caused by pests. As global warming continues, it is imperative that forms of Controlled Environment Agriculture (CEA) are further employed to protect against infestation and preclude future crises. 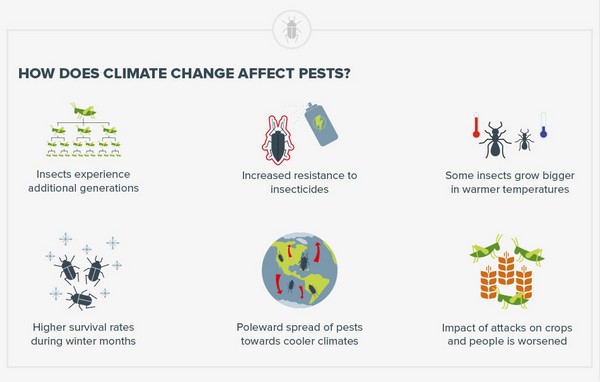 How climate change is creating a global pest problem. Rentokil

Several methods have been introduced to alleviate the problem of locust swarms, however, these have had limited effect. Locusts are notoriously difficult to tackle as they have voracious appetites and can travel extraordinary distances in short periods of time. They are known to travel 150km a day in search of new supplies creating difficulties for trackers. Erratic weather conditions and heavy rain only exacerbates the rate of breeding. Moreover, the swarming of locusts not only reduces food supplies for people and cattle alike but can also trigger social unrest by damaging communities and international relations cross-border.

Proposals brought forward to alleviate the problem have included alterations in agricultural practices, pesticide use, innovative methods of tracking and genetically modified organisms. These methods, however, often damage the surrounding environment and have proved to be expensive and time consuming for growers in the area.

Alterations on agricultural practices have been voiced by such proponents as Cease Lab, a research facility overseen by Arizona State University. The lab extensively researches the dietary habits of locusts and other pests to discover crops most likely to survive a swarm. Their discoveries have shown that plants low in carbohydrates and grown in nitrogen-rich soil tend to be avoided by the pests and are ultimately more resilient to an outbreak. While these findings are informative, they can also be restrictive as they propose limitations on agricultural practices and imply crop cultivation should be reflective of pests local to the area.

Notably, pesticides have been widely introduced as means of pest control despite the environmental degradation this is known to ensue. The UN’s Food and Agricultural Organisation (FAO) balances the risks of pesticides against the benefits in the brochure ‘Fighting The Locusts Safely’. Their findings note that despite pre-emptive measures, millions of hectares of land continue to be sprayed with chemical and biological pesticides during each outbreak to combat locust swarms. It is well-known that this methodology not only endangers the environment by reducing diversity, but also poses a significant threat to human health through the consumption of contaminated food supplies. 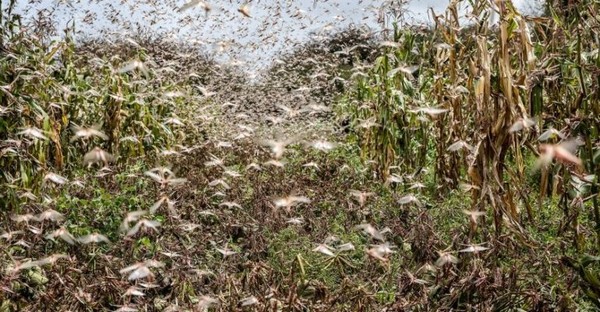 Genetically modified crops have also proven to be largely unsuccessful in the face of locust swarms. The Committee On World Food Security found in 2018 that pests become resistant to the pesticides produced by genetically modified crops far faster than expected. In addition to the insecticides already synthesized by the GM crops, further agrochemicals were required to combat pest resistance which ultimately resulted in only more environmental damage being caused than that of conventional agriculture.

Furthermore, contemporary methods of tracking locust swarms to combat their development are both expensive and labour intensive. The Food and Agricultural Organisation latest update on the crisis stated that it is engaged in a ‘race to outsmart locusts with drones and data’. The organisation employs simplistic technology like GPS trackers and smartphones to track the swarms, while also investing in more expensive rotary and fixed wing drones for surveillance. There is also collaborative work being undertaken in partnership with NASA and the European Space Agency to predict locust patterns via satellites. While these methods are certainly advanced in their means of tracking and predicting outbreaks, they are undoubtedly costly and labour intensive which detracts in part from the process of cultivating harvests. Moreover, as East African countries affected in the latest outbreak are not the usual frontline of locust infestations, there has been increased pressure on equipment and technologies utilised by the FAO to combat the crisis.

It is clear that rapid expansion of locust swarms in recent months has had devastating effects on food security. While several methods have been introduced in targeted areas, it would appear that these are costly and largely inefficient. The solutions tend to trigger adverse reactions in the environment and put human health at risk which contradicts directly the intentions of surrounding communities. In light of this crisis, controlled-environment agriculture appears to offer a viable alternative by protecting crops from pests without the need for chemicals and genetic modification. Indoor farming is once again highlighted as an essential industry in the path to achieving global food security through its ability to maintain controlled-environmental conditions and fortify crops against external crises.