‘Food security & Climate change post-COVID-19’ was the title of a webinar held by Euractiv. Here, European commissioner for Agriculture Janusz Wojciechowski held a keynote speech, as did Erik Fyrwald, CEO of Syngenta. The first spoke about the strategies for food security from the European Commission, and the latter spoke about Syngenta’s Good Growth Plan.

Proud of European farmers
“We are very proud of our European

farmers and food business operators. We’re the only sector that reduces greenhouse gas emissions, and we are constantly taking steps to further increase this,” said Janusz Wojciechowski. Farmers will play a key part in this, but not the sole part. The whole food chain has to become more sustainable. “And the consumer has to be educated to make healthier, and more environmentally friendly choices.”

Food security
According to Janusz, one of the European Commission’s priorities is taking rapid steps for food security. “Not just in the short term, but also in the long term.” The EU’s food system has to transition to a more sustainable one, to protect the health of humans, animals and plants. “Family farms, small to medium sized, are also a priority. These are the real leaders in productivity.” Over the period from 2005 – 2015, the European Union lost 4 million farms. It went from 14 million to 10 million, meaning that each day, at least a thousand farmers stopped. “We need to stop this trend.”

The budget for the transformation to a sustainable food chain is 391,500 billion euros. “10 years from now, we should look back and be able to say that we made good use of resources in the past decade. Farmers provide the EU citizens with food security, and it is the task for politicians to, in return, provide the farmers with economical security.” 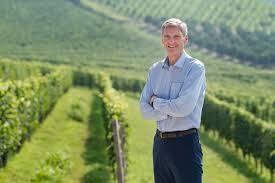 was launched in 2013, and almost all targets were met. Therefore they now come with a new one. “A recent survey showed that 59% of farmers say that their business has already been impacted by climate change,” said Erik Fyrwald, “and 72% expects that they will be harmed in the coming years.” The company wants to do more for farmers to help them reduce their carbon footprint, among other things.

The plan also includes teaching farmers safe and precise use of pesticides and fertilizers. “Over the last 50 years, all the innovations in new pesticides have lowered the use rates a great deal.” And with innovations in seeds, the company wants to ensure that farmers need less water, less nitrogen and fewer pesticides. “Together with farmers and food producers, we want to create an EU-wide network for protecting the environment and biodiversity, and still have enough food to feed the growing world population.”