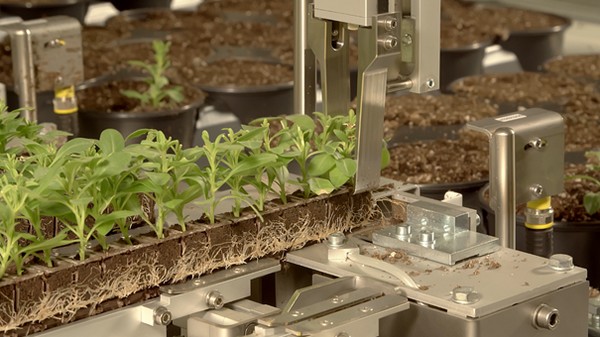 Media Strip concept
The Media Strip concept consist of three things; the strip, the plug and the tray. The strip is available in the 34 count module. Like all other AutoStix strips it is made of a biobased material. The glue plug is an Obturo plug developed by Van Der Knaap. This substrate already has showed some excellent growing results. A growing tray is developed to hold 15 Media strips. The tray is designed so that Media strips fit in perfectly and can be transported in a convenient way.

Supply chain
The strips are filled with media and shipped to off-shore production locations such as Africa or South and Central America. These farms will pre-stick the cuttings in the strip and place them in the tray. The tray will be shipped into a box with 2,500 cuttings to the North American grower. After about two to three weeks rooting, depending on the crop, one will have a nice rooted plug which will be ready to be transplanted with the AutoStix machine into a larger liner or a finished pot.

Machine
The Media strip is ready for use for all existing AutoStix machines. Visser’s 6-gripper machine for AutoStix can reach a capacity of up to 10,000 cuttings per hour. The AutoStix machine can be connected to a pot filler directly, which makes the process of automatic cutting transplanting in pots even more efficient. Main benefits of the AutoStix system are less propagation time, reduced propagation space and less labour due to less touches on the plant.

Open Source
The development of AutoStix with the new Media strip is open source, which means the strip is available to all AutoStix users and suppliers. Every grower has access to the development of new strips to adjust them so that maximum efficiency can be achieved. Already more than twenty-five farms are filling AutoStix strips and shipping them to growers in North America, and there are over thirty machines installed and running in North America at the moment.

View the introduction video of the AutoStix Media Strip below.