An introduction to far-red light

Ceres wants to help their clients become smarter growers by staying at the forefront of greenhouse technology. The company does their own research on greenhouse systems, and collaborates with research institutions to optimize their structures. Below you can find an overview of red and far-red light radiation and its effects on plants.

LEDs and plant growth
While LEDs are often promoted for reasons of efficiency, what is often underexplored is how they can be manipulated to mimic different parts of the color spectrum. Photosynthesis is associated with growth from direct light energy while photomorphogenesis is defined as the effect of light on plant development.

This is an emerging topic of research and it has led to ongoing commercial applications. Changes in the radiation spectrum can impact plant growth. It can manifest in different ways such as taste, flavor, pigmentation (anthocyanin concentration), chlorophyll content, shape, and flowering time.

When it comes to red and far-red radiations, plant growth responds a certain way and we will focus on why this is and how they can be applied to specific crops.

Red and far-red
There are two forms of phytochromes (a blue-green pigment found in many plants, that regulates various developmental processes) when talking about red and far-red radiation. One form absorbs the red part of radiation (600 to 700nm) and its abbreviation is PR , the other form absorbs far-red radiation (700 to 800nm), it’s abbreviation is PFR.

The graph below shows that plants are very efficient at absorbing Red. The green line 'relative quantum efficiency' is how efficient the light is at different wavelengths for plants. The black dashed line 'luminous efficiency' is how the human eye sees light. It is important to note that both forms of Phytochromes share a common band of absorption. That means that every time that a plant receives light, both forms will be present. 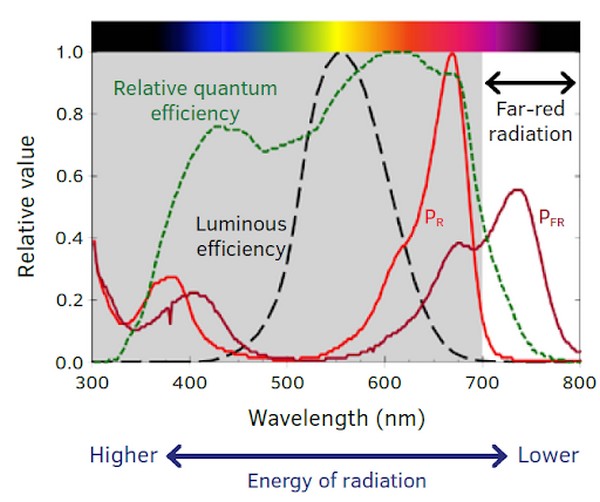 Sunlight emits both red and far-red radiation. Leaves exposed to direct sunlight absorb almost all the red light but transmit the far-red to the leaves underneath the plant canopy in a sort of filtration process. When the plants underneath the canopy receive a greater proportion of far-red, they respond with physical elongation in an attempt to capture available light. This response is called “shade avoidance”.

In the shade, plants don’t receive enough energy and so they start building processes in order to survive. As well as stem elongation, they also grow larger leaves (leaf expansion) to maximize the surface area and their chance to harvest photons. Both cases are a result of cell expansion.

Research shows that for the same artificial light intensity, under red/blue LEDs and warm-white LEDs, adding far-red light increases the quantum yield of photosystem II (one of two light reactions of plants) by an average of 6.5% and 3.5% respectively. This can potentially lead to an increase in yields.