METRO Germany is now focusing on more sustainable proprietary packaging throughout Germany. From now on, all pre-cut herbs under the METRO Chef brand will be available, featuring less plastic or no plastic at all. This means that METRO avoids more than 100 tons of plastic waste every year. The changeover is part of the wholesale company's commitment to sustainability.

METRO Deutschland is permanently working together with its suppliers on ways to reduce the use of plastic in packaging materials. Regarding fresh kitchen herbs in particular, conventional packaging is often made of plastic. This is why METRO is taking the next logical step: with immediate effect, all packaging for METRO Chef Cut Herbs will use less plastic. The new private-label packaging consists mainly of paper that comes from sustainable cultivation and is certified according to the FSC guidelines. For example, the newly developed cress trays are made entirely of paper. 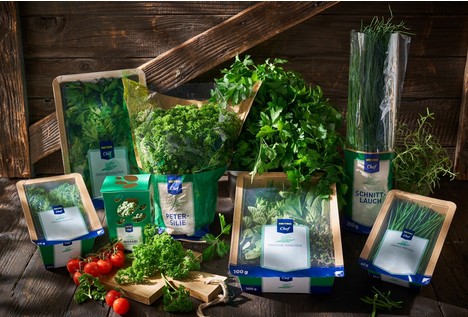 With the new herb packaging of the METRO Chef label, the company saves more than 100 tons of plastic waste per year / Photo: METRO Germany.

Packaging innovation with less plastic
In other packaging forms for pre-cut herbs, where plastics cannot be avoided for reasons of quality assurance, the use of these is largely reduced. The proportion of plastic in the films for chives, for example, is now 35% lower than in previous iterations, and the trays for the majority of the herbs only have a thin plastic lid. The new funnel bags for bunched herbs such as parsley contain about 65% less plastic; this change alone saves several tons of plastic per year.

Another innovation is the so-called Top Seal solution: it allows trays of herbs to be resealed up to 100 times. This keeps the herbs fresh longer. This way, the new METRO Chef herb packaging also contributes to reducing food waste. The nationwide conversion was initially preceded by a test in the Rhineland region. Following positive customer feedback, the innovation was extended to more and more METRO wholesale stores.