Food system innovations – and how to get there

An international group of almost fifty scientists identified 75 emerging innovations and has drawn up 8 action points with the aim of accelerating the transition to a sustainable and healthy food system. They published their action points in Nature Food. "The emerging innovations will contribute to achieve a sustainable food system," says Dr. Hannah van Zanten of Wageningen University & Research, one of the authors.

Today, forty percent of all land on Earth is used for food production. It contributes to land use change, biodiversity loss and greenhouse gas emissions. ‘Major changes in the way we produce our food are therefore required’, says Dr. Hannah van Zanten. Such a transition towards a sustainable and healthy food system requires a combined effort of farmers, consumers, food companies and policymakers.

Under coordination of Mario Herrero from the Australian Commonwealth Scientific and Industrial Research Organization (CSIRO) 75 emerging technologies were invested that span the entire food value chain, from production and processing to consumption and waste management. Some we know, such as drones, 3D printing and vertical agriculture. Others require a bigger stretch of the imagination: nitrogen-fixing cereals that do not need fertiliser or feed for livestock made from insects or produced from human sewage. 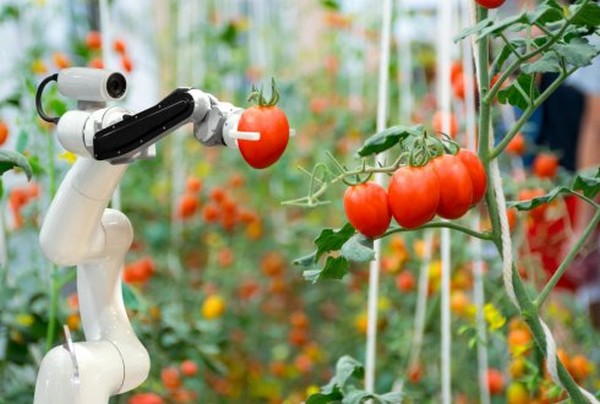 Action points to foster the transition
While the study focuses on the transformative potential of technologies, it also proposes eight action points that could accelerate the transition towards a more sustainable food system. Of the eight action points in the perspective paper for accelerating the system transformation, at least five revolve around building trust, changing mindsets, enabling social licence and safeguarding against undesirable effects. ‘Therefore, besides technological development a constructive societal dialogue is critical to establish clear transition pathways towards future sustainable food systems’ says Dr. Hannah van Zanten.

The first point is building trust among the actors of the food system: farmers, consumers and food companies. This involves a set of shared values about the desirability of different food system outcomes, for example sustainability, provenance and socioeconomic benefit.

The transformation of agriculture requires a learning mindset by the actors of the food system. The need to better understand a technology and to transform mindsets arises particularly in case of technologies whose advantages and disadvantages are still largely unknown for a broad audience, for example reconfiguring photosynthesis.

Social licence, guaranteeing changes and marked incentives
Public investment in technology development should be tied to social licence and technology acceptability. Without engaging all the actors involved potentially powerful technologies may not be adopted, like genome editing for example.

Expectations about future policies are essential for both public and private investments in technological change. Policies and regulations that are guaranteed can help steer expectations in a desired direction though subsidies or direct investment.

The appropriateness of measures and marked incentives and the factors that are critical to the success of transformational innovations are often context end technology specific. Making market incentives accessible to new entrants is critical, as it is unclear whether transformative innovation will emerge from established industry players.

Safeguarding undesirable effects and ensuring stable finance
There are real challenges in designing policy and investment frameworks to harness the transformational potential of new technologies. Unintended consequences which cause indirect, undesirable effects may be overlooked, especially where public acceptance remains to be determined. Because this transformative change is likely to be unpredictable and its impact variable, stable finance is needed to ensure technology exploration and piloting under real-world conditions to test its effectiveness.