Mexico’s climate conditions and its strategic proximity to the North American markets make it perfect for agriculture. What it lacks is the sophistication seen in more developed markets, which have less land and sub-optimal conditions, but multiple times the installed capacity.

That's what the entrepreneurs of the new Mexican enterprise, Rising Farms see. "A staggering 60% of Mexico’s protected agriculture isn’t operational. The reasons why range from a lack of expertise to access to capital," says Mauricio Ricaud Arriola, COO of the newly formed produce growing company.

Here’s where Rising Farms comes into the picture: Founded in early 2020, they embarked on a mission to bring these operations back to life, and up to their potential and profitability. This week they've planted the first tomato plants in their leased greenhouse in Querétaro, Mexico. “Our plan is to scale up quickly to several facilities in the near future.” 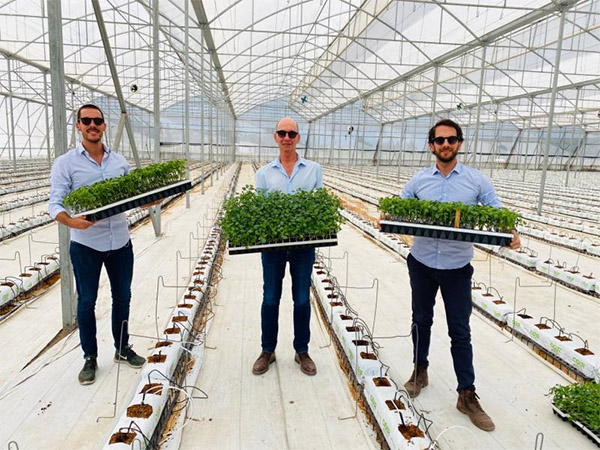 Young plants in the new greenhouse!

Normal cultivation start
When walking through the paths, the newly opened 484,000 square feet greenhouse of Rising Farms seems like a normal cultivation company starting the new season. They’ve propagated their own plants thanks to a specialized propagator and to protect the young Medley tomatoes during the hot weeks, a coating is applied to the greenhouse roof. Strict sanitary and distancing measures are in place, as per government dispositions, to protect the workers and the plants. Starting from July and collaborating with companies like Topline Farms and Lakeside Produce, the tomatoes will find their way to Canadian and American supermarkets.

So far so good – but it’s the financial arrangements that make the Rising Farms business model so remarkable. The greenhouse is leased. In doing so, the company wants to leverage existing under-utilized facilities without having to incur in the traditional Capital Expenditures.

“By taking control of farming operations with a lease model, we are able to provide sophistication in the form of capital, know-how, technology, and proper planning," Mauricio explains, adding that they had incorporated an experienced management team across key areas of the business to do so.

The funding round for this venture was made up of several retail investors.  “We lease the plot, the greenhouse, and all the equipment. Investors don't support the day to day ops," Mauricio continues.

According to his calculations, this will make investment returns 8x faster. “Therefore growth can be faster and become exponential. We employ and will employ the best talent and sophistication needed to make this happen. Thanks to our scalable model we want to become a key quality player in the country: This first greenhouse will give way for us to at least double our installed capacity next year with another unit, and more and bigger after that in an exponential manner.