Around the corner from their greenhouses that are currently full of yellow peppers, construction of another seven hectares of greenhouse is ongoing for Dutch grower De Tuindershoek to grow red peppers. The project started with 3.5 hectares, but when the second plot of land was also acquired just before the start of construction, phase two could follow immediately, making it 7 hectares in total. 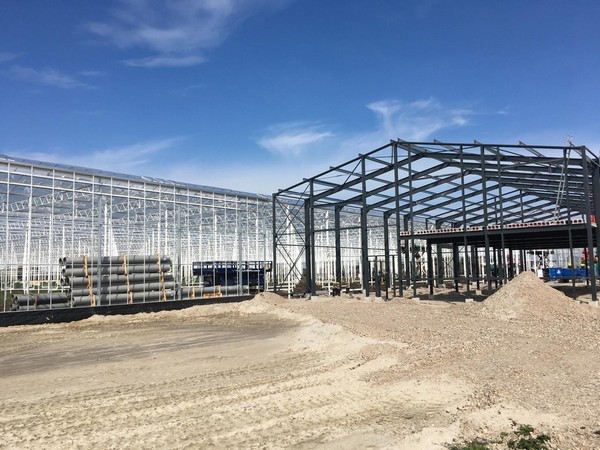 The reason for the construction is that the next generation of the Kaashoek family is interested in taking over the company. With the new addition it is easier to have the sons of growers André and Paul join the company.

Available land
Initially, the original construction plan was already based on the construction of seven hectares of greenhouse. All technical installations were designed and prepared for this, says Ron van Luijk, project leader on behalf of AAB. "The adjacent plot with another 3.5 hectares was previously not for sale," André adds. "But because that plot of land became available just before the start of construction, we can now realize the project in one year."

Common techniques
The greenhouse will have a higher leg height, will be constructed from white coated steel and will have a slip-in screen installation. These are now common techniques, but really new compared to the old greenhouse from 2004. In that year, André and Paul moved from Moerkapelle and Waddinxveen to the Koekoekspolder in IJsselmuiden.

Biomass and green CO2
The most remarkable feature of the new construction project is that the new greenhouse will be fully heated by the adjacent Bio KKP wood burning installation. "Pipes have been laid from this installation, which will be connected to a heat exchanger," Ron explains. "There will be no on-site heat generation." André adds: "There will be no gas connection. We also use green CO2."

In the future there will also be a circular line in the Koekoekspolder. "We can use this to heat our greenhouse with geothermal heat," André says.

Red peppers
But first the greenhouse needs to be finished. Works here are in full swing as can also be seen from drone footage at Dutch newspaper De Stentor. The steel structure is two-thirds up. It is planned that in November the plants can be sown for the first cultivation of red peppers. "Providing additional spread to the yellow peppers," André concludes.