To some it makes perfect sense, to others maybe less. Dutch people, like Scandinavians, for example, would generally look for the webshop first. If they can't find what they were looking for, they might ask. But if you go a little further south, or for example to a country like Brazil, buyers often send a text or a recorded message right away. Often even without looking for themselves. In consequence people spend lots of time answering all these messages.

There is a way to do handle this flow of largely repetitive messages a bit smarter, Albert Haveman, a Dutch business developer working at the Portuguese software company Penguin Formula, knows. This company developed PIAF, smart software that can largely automate these processes. Software that can read questions, write them but also interpret spoken messages and take action based on these messages. Like booking a product from the webshop or check for availability and prices. Or place backorders, or, on a more advanced level, proactively make suggestions. "A sort of Tinder for plants, but also think of the customer's customers. These come up with largely the same questions, which are simply put through. There are countless smart links to be made and PIAF is the communication layer that ensures that the information is linked to the back office systems". 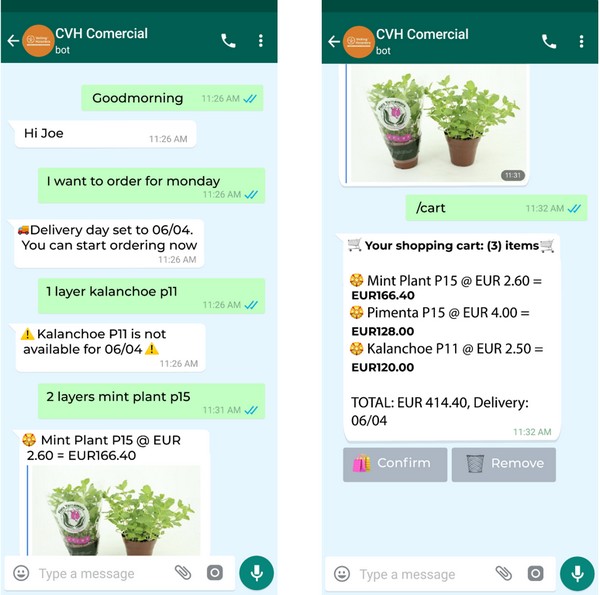 Doubt turned into enthusiasm
Not everyone has good experiences with chat robots, but this is different. "Auction Holambra, our first real customer in horticulture, goes live this week with the first users. The goal is that within 3 months 80% of all incoming messages will be processed by the robot. In the implementation phase, the robot has been trained by thousands of example messages. This allows the system to think along better and the accuracy is increasing. Of course, in the beginning there were doubts whether such a thing would really be possible. Until we installed the first version and text and audio messages were processed automatically. Then doubt turned into enthusiasm."

Albert has an extensive background in IT, in which he has worked closely with the e-commerce department of the floriculture auction in Holambra for over six years. There, he saw with his own eyes that a group of around 20 sales people spend large chunks of time answering and processing all these messages. Now that Albert, working at Penguin Formula got more involved with the so-called natural language processing techniques, his Brazilian business relation quickly came to mind again.

The video above explains how the software works.

From hotel to Holambra
"In addition to PIAF, Penguin Formula also develops software that allows hotels to manage meeting rooms. Large hotels sometimes have 20 or 30 of them. Requests usually come in via e-mail, in which date and time slot is mentioned. In addition, a customer specifies what type of room it should be, what facilities he wishes to use, what time coffee should be served and how many sandwiches they require for lunch. In practice, such a request ends up at the receptionist, who easily takes about 15 minutes to process it. By linking PIAF with the software of the hotel, the requests are processed automatically and the customer has an immediate answer".

"To cut a long story short, it really seemed to be a good solution for Holambra. They have a great webshop, but some customers still placed their order via WhatsApp, because they simply find this easier. I wanted to automate this process without asking the customer to change his behaviour".

In this video the case at Holambra is visualized.

Solution for the entire fresh market
This way of communicating is not exclusive to Holambra or Brazil. Also in other countries, and undoubtedly also in other sectors in which rapid and frequent communication is required, people send each other countless messages. "Although the Dutch are using less voice messages - they tend to prefer email and existing ordering systems - also they are being kept busy with answering WhatsApp messages. Just before the worldwide corona crisis broke out, I visited two exporting companies in the Netherlands. They were very enthusiastic. Now, due to the circumstances, everything is on hold for a while, but" he concludes, "the enthusiasm is not gone. It saves a lot of work - a solution people are always interested in - perhaps especially in times like these."