Mexico’s role in the US blueberry market

Mexico jumps to second place regarding blueberry shipments to the US

As Mexico's blueberry season just reached its peak, the opportunity lends itself to look a bit deeper at the U.S. markets.

The rise of Mexican blueberries in the U.S. market has been no small achievement. In 2010, they represented a mere blip on the map. In 2019, with 75 M lbs, they were the second largest importer of fresh blueberries to the U.S., second only to Chile, but with Peru trailing closely behind Mexico.

In 2010, the landscape for blueberries was very different from what it is today. Chile has grown considerably, the U.S.’s production has evened out more, pushing more volume into April and May, and of course, Mexico is now a primary source through this time period. 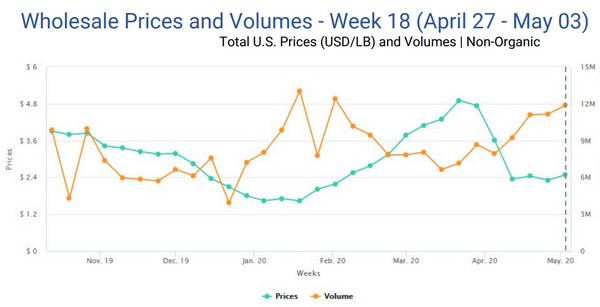 The effects on prices have been equally dramatic. In 2010, a lack of supply pushed prices up to nearly $8 USD/LB, even holding pricing over $6 USD/LB for most of April. Last year, the picture was very different; the highest price the market saw during this time period was $5 USD/LB, maintaining pricing above $3.50 USD/LB for only four weeks around April, where in 2010, prices were above that threshold from January through mid-May.