Guggenheim tomatoes are monitored from the Netherlands

Although the Guggenheim’s “Countryside” show was shuttered by the pandemic, its crop of cherry tomatoes is still growing, and feeding New Yorkers. In a video Infinite Acres shows how they realised this project. 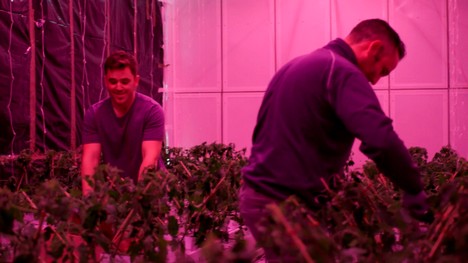 Though the project has evolved quite unexpectedly due to the COVID outbreak, meaning that the halls of the Guggenheim Museum are pretty quiet these days, with mostly just its ghosts and some security guards as company for the art. Oh, and then there’s the guy who takes care of the tomatoes.

David Litvin, an indoor crop specialist at 80 Acres Farms, tends the plants in a temporarily shuttered exhibition, “Countryside, The Future.” 80 Acres Farms are the growers and operators of the module. He moved to New York from Tel Aviv in February, along with his wife, Stefanie, and their Dutch shepherd, Ester, with a plan to stay six months harvesting the Guggenheim tomatoes. He was going to see the city, too. “I went out once to a comedy bar, but that’s it,” he said to The New York Times.  The museum has been closed since March 13, but Mr. Litvin still walks across Central Park every day around noon from his rental on the Upper West Side to tend to his flock. “When you grow tomatoes on Fifth Avenue, you want to have the perfect tomatoes, there’s no room to mess up,” he said. “If I have ugly plants, I’ll hear it from the neighbors.”