With spray lance on wheels, you can also chalk or coat during strong winds

You could call it the red line in the innovations of Willem Poppe: the bicycle. He already developed the chalk bike to chalk the greenhouse while riding a bike, and has now developed a spray lance on wheels, the size of a children's bike, with which his company Helderglas wants to give growers the means to make the necessary evil of chalking and/or coating more efficient and sustainable. 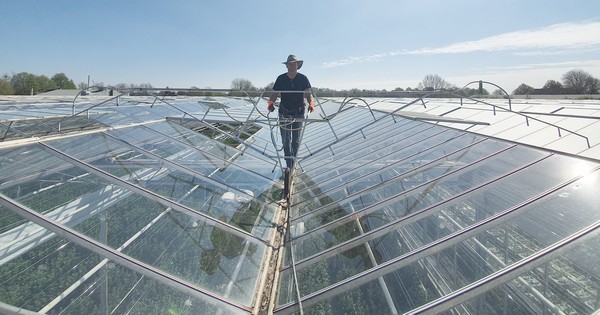 Even
The system is a spray lance on wheels with which the grower or employee can walk through the greenhouse gutter and evenly spray the cover to apply an even layer of chalk or coating to the greenhouse cover. The lance has a dozen nozzles on both sides of the gutter. "It works as fast as a spray gun, although with my invention you can spray both sides of the greenhouse at the same time. The largest advantage according to him is the resulting even layer of chalk or coating and the reduced waste."

Saving buckets
According to Willem, that waste can amount to a lot of buckets of chalk. "According to my calculations, it can even reach thirty percent, but equally important is that it is more sustainable because the chalk or coating does not end up in the ditch, verge or in the gutter itself."

Plenty of manual labor
As the devil's advocate, it is not hard to argue that chalking is more and more mechanized, but Willem still thinks otherwise. "For many greenhouses, automated chalking is not possible due to size, gutter quality or location of the greenhouse. There are plenty of greenhouses which are manually chalked or coated and that is no different abroad, perhaps even more so."

Also at Beaufort 5
Another advantage of riding a spray lance on wheels through the gutter is that the distance between the lance and the cover is smaller than when an employee or grower uses a spray gun. There is less spray drift, so even with Beaufort 5, you will get a good result."