Plants pass on 'memory' of stress to some progeny, making them more resilient

By manipulating the expression of one gene, geneticists can induce a form of “stress memory” in plants that is inherited by some progeny, giving them the potential for more vigorous, hardy and productive growth, according to Penn State researchers, who suggest the discovery has significant implications for plant breeding.

And because the technique is epigenetic — involving the expression of existing genes and not the introduction of new genetic material from another plant — crops bred using this technology could sidestep controversy associated with genetically modified organisms and food. 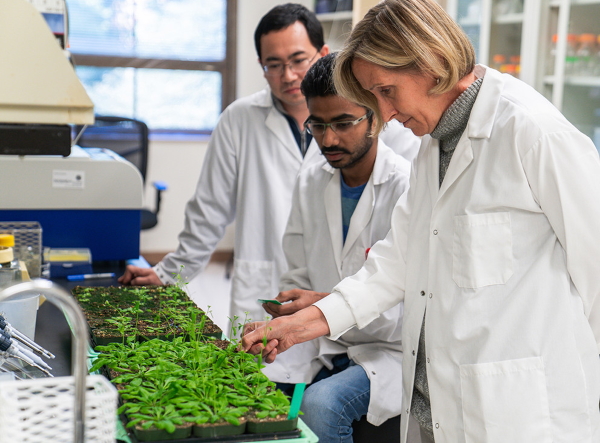 “One gene, MSH1, gives us access to what is controlling a broad array of plant resiliency networks,” said Sally Mackenzie,  professor of plant science in the College of Agricultural Sciences and professor of biology in the Eberly College of Science. “When a plant experiences a stress such as drought or prolonged extreme heat, it has the ability to adjust quickly to its environment to become phenotypically ‘plastic’ — or flexible.” 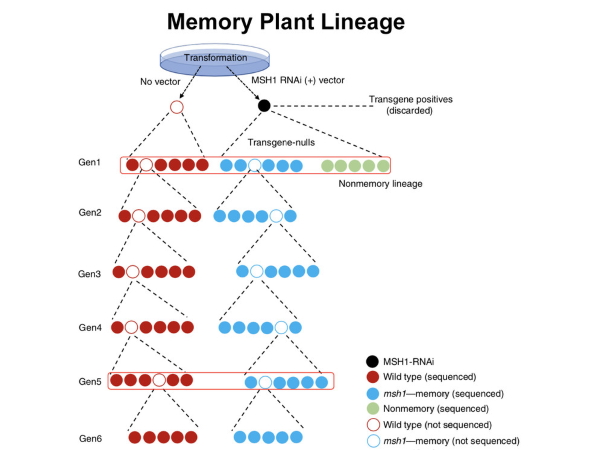 There are many ways to inactivate the MSH1 gene, researchers explain, and in this context they all work. In well-studied plant species, like Arabidopsis, tomato or rice, it is possible to identify mutations in the gene. In others, and for commercial testing, it is possible to design a transgene that uses “RNA interference” to specifically target MSH1 for gene silencing. Any method that silences MSH1 results in very similar outcomes, they report.

"When plants are modified epigenetically, they can modify many genes in as simple a manner as possible,” Mackenzie pointed out. That includes adjusting the circadian clock — detecting light and triggering growth and reproductive phases — and modifying hormone responses to give them maximum flexibility, making them more resilient.

Plants that “detect” stress after the MSH1 gene is silenced can adjust their growth and change root configuration, limit above-ground biomass, delay flowering time and alter their response to environmental stimuli. Those responses are “remembered,” researchers reported, and passed in selective breeding through many generations.

“In our research, we show that this memory condition is heritable by progeny but occurs in only a proportion of the progeny — so that there are memory and non-memory full siblings,” said Mackenzie, the Lloyd and Dottie Huck Chair for Functional Genomics. “That results in definable gene expression changes that impact a plant’s phenotypic ‘plasticity.’ We suggest that all plants have this capacity, and that the condition that we describe is likely to be an important part of how plants transmit memory of their environment to precondition progeny.” 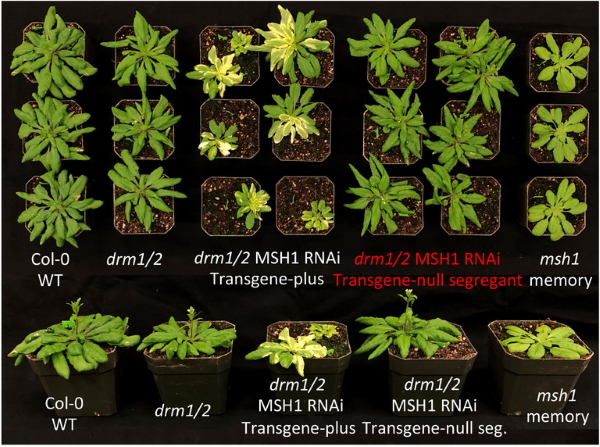 This view shows the wide variety of growth between memory and non-memory plants in the research. Image: Sally Mackenzie Research Group/Penn State

By adjusting the epigenetic architecture of a plant, researchers were able to access its resiliency network, and see how genes are expressed quickly and broadly to adjust a plant’s growth to adapt to the environment, noted Mackenzie, director of the Plant Institute at Penn State.

The researchers identify pathways that enhance root growth and plant vigor — increasing yield.  They present their results today (May 5) in Nature Communications. When an MSH1-modified plant is crossed or grafted, this enhanced plant vigor becomes quite pronounced.

Researchers contend that plants can be “reprogrammed” epigenetically to express genes differently without altering genotype, which constitutes a non-traditional approach to breeding. Because they can now identify gene networks that appear to be targeted by this manipulation, researchers report that plants have mechanisms designed to address stress or alter growth, and these can be accessed.

The researchers focused their efforts on the small flowering plant, Arabidopsis, or rockcress, a relative of cabbage and mustard in the Brassica family. It is one of the model organisms used for studying plant biology and the first plant to have its entire genome sequenced. Arabidopsis is useful for genetic experiments because of its short generation time and prolific seed production through self-pollination. Researchers grew five generations of Arabidopsis to study “memory” and “non-memory” plants.

In follow-up research already underway in Mackenzie’s lab, the researchers have suppressed MSH1 genes in tomato and soybean plants and grafting experiments have been field tested with excellent yield results. A large-scale experiment growing MSH1-modified canola is now in the works. This technology is part of a start-up company called EpiCrop Technologies Inc. that was co-founded on MSH1 technology and its utility in agriculture.