"We didn't see it coming," says Dutch cucumber grower Arthur van Geest. About thirty meters from front to back his greenhouse in Tinte was hit by a whirlwind last Thursday. "It happened between 7.15-7.30. Colleagues have also been hit." At a colleague grower five employees were injured. Three of them were treated at the scene by the first responders, two of them had to go to the GP post. The day after, last Friday, also growers in De Lier were hit by a whirlwind. An employee of a tomato grower was injured in his leg.

Last Thursday and after the initial shock, the damage reports from Tinte continued to trickle in during the course of the day. Added together, the whirlwind destroyed several hectares of glass at four growers, injured five people and crops are being cleared to eliminate all risks of food safety.

Realization
For Arthur van Geest, who had just started the second round of cucumbers, the next few days will be 'cleaning and pondering'. "We will see," according to the grower who only. His employees got off unscathed.

The insurance company was called upon as well, tells Arthur. "The prices were just rising a little again and we were busy harvesting, but now it's picking up glass and determining the exact damage." 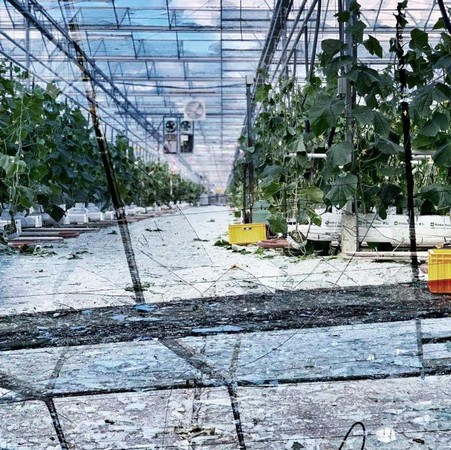 Rebuild
At RedStar everyone was unharmed, much to the relief of General Manager Henri Lambriex. "When the whirlwind hit our greenhouse, we had 15 employees at work there. I dare not think about what could have happened. I am happy that everyone is unharmed. I am also very grateful to the police, fire brigade and ambulances who arrived quickly to offer help."

The tomato grower has lost 6,000 square meters of greenhouse. "We are going to rebuild those greenhouses quickly because the demand for our special tomatoes is high. We are even expanding considerably to meet the demand. In particular now that restaurants here and there are opening their doors again and entrepreneurs in the hotel and catering industry did not give in to the corona crisis, but switched to take-away and delivery."

Safety glass
At organic nursery Frank de Koning it is estimated that 1.5 to 2 hectares of glass was destroyed a little after seven o’clock, as manager Wim van Marrewijk estimated from the affected cucumber greenhouse. "It is true that we have safety glass, but that breaks into tiny pieces. These can be stuck on the leaves and on the fruits. We are clearing everything, because we do not want to take any risks with food safety." 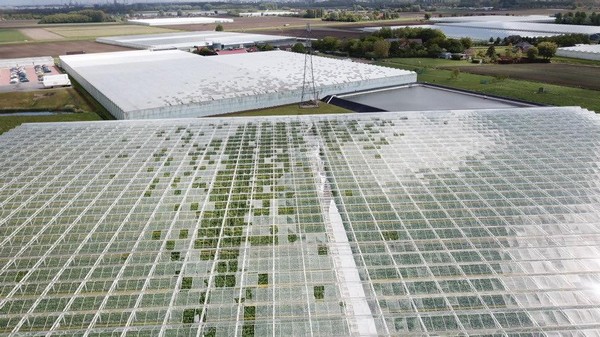 Not the first time in Tinte
Tinte has previously been affected by a bizarre natural phenomenon, RedStar recalls. On May 1, 2017, a mini tornado was observed that fortunately did not cause any damage.

Colleague grower Vers van Voorne breathed a sigh of relief that the whirlwind passed the company. The grower expresses his condolences to the affected colleagues and shared photos on Facebook that show the damage very clearly.

Tinte whirlwind
Last Friday, exactly one day after a whirlwind hit a few growers in Tinte, it hit De Lier. Several growers reported damage to Coldenhovelaan. An employee of a tomato grower received a piece of glass and no one else was injured in his leg.

At least a handful of growers were hit and sustained damage ranging from a single pane of glass to several hundred pieces. Van Uffelen Flowers was hit hardest with approximately 1,400 broken windows.

"Last Saturday we immediately started to remove the largest pieces of glass so that the cloths could be closed again," says grower Jeffrey van Uffelen. "We also stuck a lot of water pipes, punctured by falling glass. It remains to be seen how much damage we will eventually have to the crop, but I am hopeful that it won't be too bad. If this happens in the winter, it would have been a lot worse. The timing is relatively favorable in that respect."

At the moment, the first windows are already being replaced. The grower has about 200 in stock. Of course, the necessary glass has been ordered. This should be delivered in the course of next week.